Do you want to know what all the 4-H buzz is about? Read on to get a glimpse into our first summer day camp of the 2022 year! 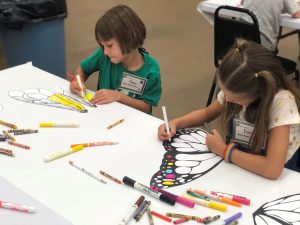 Camp began with a lesson on pollination that educated campers about the many different types of pollinators. From bees to butterflies to humans, the youth were surprised to learn just how many types of pollinators there are. Then it was time for the youth to experience being a pollinator first hand! Campers got to become their very own pollinator by creating wings and masks that simulated common pollinators. With their new pollinating power, campers were tasked with completing a pollination challenge. They collected nectar from flower stations around the room and picked up pollen along the way. They were amazed to see just how much pollen was spread around as they traveled between flowers! 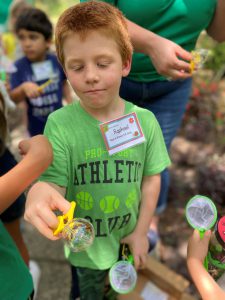 The topic of pollinators peaked an interest in insects amongst campers. Before we went outside to explore, campers were equipped with their very own bug catching kit in the hopes to get a real-life glimpse of some of the pollinators we had just learned about. Campers were delighted to be successful in finding many types of insects and pollinators! They had a blast viewing the insects in their jars. Once everyone had a chance to showcase their finds, it was time to unveil a big surprise! Each camper was thrilled to be given a group of live ladybugs to release into the garden. Before the big release, we reviewed the benefits of having ladybugs in a garden and how they can help defend your plants against pests. After receiving the “OK,” the campers happily released the ladybugs into their new home.

After lunch, we moved onto the topic of flowers. Each camper was given different parts of a plant and learned how each part played a role in the plant’s life. Campers were also given a blank petal to decorate to their liking. The campers then gathered as a group and worked together to assemble all of the pieces. Once they were familiar with the individual plant parts, they were given a variety of food items that symbolized the different parts of a plant. Before eating the items, they were asked to use them to create a plant. After receiving the stamp of approval from the camp leader, they were able to eat their plant shaped snack!

As the end of camp drew near, campers were able to bring out their creative side and make their very own flower arrangement. While making their arrangement, campers were taught the importance of empathy and nurturing relationships. Campers worked to create a card to someone they admired to go along with the flower arrangement. We discussed how actions of kindness can make others feel special and wanted. At the end of camp, campers presented their flower creation to a parent or loved one.

Campers walked away with a better understanding of plant science and care for living things. The Bugs & Blooms Cloverbud Camp was just one of the many camps that St. Johns County 4-H has to offer! Be sure to checkout our  website to see the other fantastic camps available this summer! 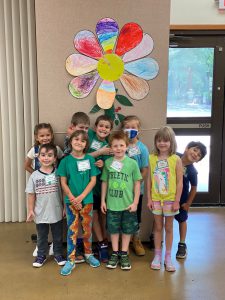