Faced with more garden time than I’d planned lately, I thought I might share one of my favorites, the whisk fern, Psilotum nudum. It is found in tropical Africa, Central America, tropical and subtropical North America, South America, tropical Asia, Australia, Hawaii, southern Japan and even a few spots in SW Europe. Whisk ferns apparently are quite common in Central Florida. They often pop up in nursery stocks and are viewed by some as a weed. I find their unusual morphology and habits intriguing and it just looks cool! Like the other species in the family Psilotaceae, it lacks true roots. It absorbs nutrients through root-like hairs on rhizomes (hence, “rhizoids”) that partner with mycorrhizal fungi for better nutrient absorption. Photosynthesis takes place entirely in the stems, which have stomata normally found on leaves.

Its name, Psilotum nudum, means “bare naked” in Latin, because it lacks most of the organs of typical vascular plants. It has neither root nor leaf and appears to be just a mass of bare twigs. Originally considered a “living fossil,” an example of the most primitive fern, botanists now feel the primitive features are a result of “evolutionary reduction,” a retreat to earlier forms by a more evolved plant.

The plant we see is the sporophyte generation, whose purpose is to form the spores for the next reproductive stage. Most interesting to me, the sporangia form is essentially all stem, though the plant bears paired leaf-like growths (“enations”) which, unlike true leaves, have no vascular tissue. Above the enations are the fruiting bodies, formed from three sporangia fused together from leaf-like scales and called synangia. When I saw my first whisk fern, I thought it was a flowering plant and assumed the yellow growths were flower buds, but indeed, these are the sporangia. From there, the more-or-less usual, if somewhat simpler, fern life cycle ensues. Spores germinating to form tiny rhizomes with both male and female reproductive organs. At this stage, the gametophyte is underground and relies on mycorrhizal fungi partners to process nutrients. The whisk fern returns the favor with carbohydrates when the fertilized gametophytes grow into a new sporophyte. 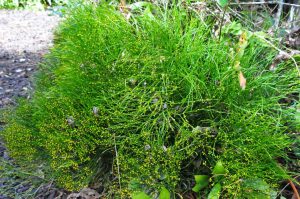 Using Whisk Fern in the Garden

So what do we do with this thing? P. nudum thrives best in partial shade and can tolerate more sunny locations, and prefers moist but well-drained soil. Plants will grow in full shade but are somewhat reduced in density, extent and size. It also is commonly found growing as an epiphyte throughout Central Florida. Anecdotally (i.e., my back yard–see photo) you can expect a clump of around 12-18 inches high and wide, while individual plants tend more toward 12 inches.. Propagation reportedly is quite easy, either from dividing, transplanting rhizomes and of course, from spores. I’m in the process of ripping out an area of what I now know to be invasive tuberous sword ferns and transplanting the whisk ferns that are now popping up, along with the fortuitously appearing southern shield ferns in the shadier parts of that plot.

For the taxonomy nerds among us (you know who you are!), Psilotum contains one other species, P. complanatum, and its hybrid with P. nudum, P. x intermedium, both of which are comparatively rare. Family Psilotaceae, order Psilotales and class Psilotopsida.

So that’s one of my favorites–I hope my fellow Master Gardeners will share their own!

Kaydie McCormick is the Residential Horticulture Agent and Master Gardener Coordinator for UF/IFAS Extension Seminole County. She has degrees in Landscape Horticulture Production and Design from Florida Southern College and a background in both retail and wholesale plant nursery sales.