On July 16 I was called out to a peanut field in Santa Rosa County. There I met with producer Steven Godwin, and CPS agronomist Greg Esco, to examine aphids they had found in the field while they were scouting for lesser cornstalk borer. The jury is still out on an official identification of the insect from the scientist and what type of impact, if any, these critters could have.

The following is what I know from scouting numerous Santa Rosa County peanut fields the last two weeks with County Extension Director, Mike Donahoe. The photos show the aphids and their numbers that we found in the first field examined. As we walked through the field we would find areas with populations, while other areas had very light population and in some areas there were few or no aphids present. The producer elected to apply an insecticide treatment to the first field, greatly reducing the population. 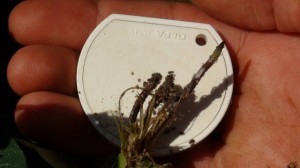 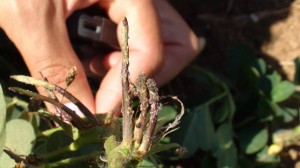 Many other peanut fields have been scouted but we have not identified a field with such a high number of aphids present in the first field. One thing that Mike and I noticed while scouting was, the fields with aphids present also had significantly higher population of fire ants working the fields. Examine your field for these aphids somewhat in the same manner as you would scout for lesser cornstalk borers. We found them down in the canopy at, and just above, the soil surface.

In the last few days we have returned to the original fields that we scouted for aphids. Some of the fields had received insecticide treatments and some had not. All of these fields had not one commonality; it was difficult for us to find live aphids to get a count and live samples for the scientist to process. We did find colonies of parasitized dead aphids, or mummies, in the non-treated fields.

It appears that the bug will probably be officially identified as the cowpea aphid. As I mentioned earlier, the scientists are still working to identify these aphids found in such large numbers (20 – 40 per peg) in Santa Rosa County peanut fields.

The cowpea aphid has a broad host range with a preference for legume crops. It is known to occur in at least 28 states. It is velvety black in appearance has a distinct waxy cover. Cowpea aphid is relatively small 1.5 to 2.5 mm long. The adult may be winged or wingless and is usually shiny black, while nymphs are smoky gray.

More information is expected within the next few days. We need to know if this is a potential new pest of concern on peanuts and if so, management techniques required. Contact John Doyle Atkins, srcextag@ufl.edu or Mike Donahoe, MikeD@SantaRosa.fl.gov for updates.