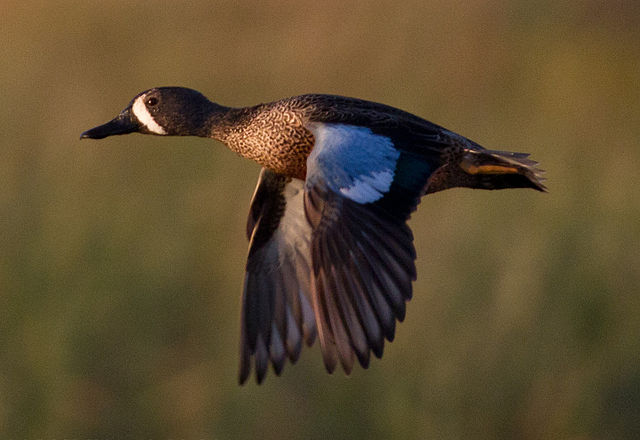 Here in Central Florida, Fall Migration usually ends with the arrival of various duck species from the cold North. Although a few may appear starting as soon as August, November and December see our “snowbird” numbers rise.  In ponds, ditches, marshes and along the coast watch for these interesting visitors to begin to accumulate.  All ducks depend on clean waterways, and the series of ponds, marshes and Lake Tarpon in the Brooker Creek Watershed are all great places to view ducks throughout the winter (October-May).

Our resident ducks, the native Wood Duck (Aix sponsa), the non-native Muscovy (Cairina moschata) and the Mottled Duck (Anas fulvigula) are all quite adapted to cope with the crowd of extra migrants. Many of the Mottled Ducks you see are actually hybrids of the escaped domestic Mallards (Anas platyrhynchos)

One of the first migratory ducks to arrive is the Blue-winged Teal (Anas discors).  This small duck is an extremely fast flier, and can often be seen in large, hurried flocks circling freshwater ponds and lakes before landing.  These ducks “dabble” which means they tend to stick their head and neck under water to forage for plants and aquatic animals. The male Blue-winged Teal has a distinctive white crescent between his eye and the base of his bill. Another dabbling duck, closely related to the Blue Winged Teal is the Northern Shoveler (Anas clypeata).  This larger duck seems even bigger given its out-sized, flattened bill held low to the water when swimming.  Extra bill size allows this duck to filter lots of algae, seeds, small fishes and amphibians from shallow ponds where they are likely to be found.

The Redhead (Aythya americana) is a very easy duck to identify.  Guess why.  The males’ bright rusty-red head is as distinctive as is the size of Redhead flocks; hundreds to thousands may be found in freshwater lakes or along quieter areas of the coast (bays, estuaries and the Intracoastal Waterway).  These ducks are almost entirely vegetarian, feeding on grasses in both fresh and salt water.  In addition to the red head of the males, look for a black breast and a grey back. Diving ducks include the Ring-necked Duck (Aythya collaris).  Found almost exclusively in freshwater, this diver searches underwater for aquatic vegetation (sedges, grasses, etc.).  The ring around the neck is not always as distinctive in identification as the white ring around the tip of the beak.  Another diving duck is the Lesser Scaup (Aythya affinis).  As the name implies, this is a small duck usually found in estuaries and the Intracoastal Waterway.  Lesser Scaup seem to enjoy an omnivorous diet, eating almost as much aquatic invertebrates and fishes as plant material.  This small black duck has white wings and a blue-grey beak.

Two species of “toothed ducks” or “sawbills” also arrive in Central Florida in winter.  These are the Mergansers.  In freshwater ponds, look for the black and white Hooded Merganser (Lophodytes cucullatus).  Usually in pairs or small family groups, the male has a distinctive black and white hood, that is raised to reveal a blaze of white feathers.  The hood may be raised when the duck is alarmed or to send another message to his family.  The Red-breasted Merganser (Mergus serrator) is found along the coast during winter.  This is a larger duck, hunting outside the surf line for fishes, either singly or working together to chase schools of small fishes into shallower water where they are quickly consumed with the Mergansers’ long, thin bill.  Males are grey with a dark head and females are grey with a tan head. Wherever you choose to view these fascinating birds this winter, keep in mind that clean water is vital to their survival year-round; from breeding grounds in the north, to clean stop-overs during migration, and finally healthy feeding grounds in winter.  Help keep our waterways clean for these wonderful waddlers!