Those Mysterious Molds, Part 1: “The Blob”

“The Dog Vomit Fungus” aka “The Blob” 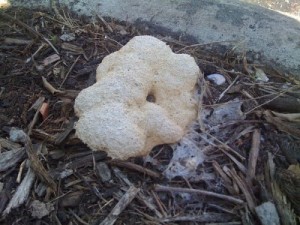 It isn’t truly a fungus, but it’s fungus-like enough that mycologists (scientists who study mushrooms and other fungi) study it. Technically it is a Myxomycete, or plasmodial slime mold, named Fuligo septica. It looks kind of like that expanding foam used to fill cracks and gaps in walls around the house and garage. It has no definite shape, just a small irregular mound less than an inch in height and anywhere from around an inch to over a foot in diameter (if an irregular shape is allowed to have a diameter). Unlike expanding foam, it has a crusty-flaky coating instead of a smooth firm “skin”. If you scrape the yellowish-tan coating away (you can use your finger, but a stick will work if the that sounds too gross), you’ll see the purplish-brown spore mass inside. Spores are like seeds… They are the way myxomycetes reproduce and spread from place to place. When mature, it is completely dry and will disintegrate into an airborne cloud of spores under foot or lawnmower. Before it matures, it looks like a slimy-gooey-frothy yellowish-brownish-greenish blob.
They are common following rains or irrigation during the warmer months anywhere there is ample organic matter. This includes lawns, mulched areas, compost piles, bare soil, tree stumps and old logs. Sometimes they even “climb” a few inches up walls or the base of plants. They are not known to be harmful at all to plants or animals (including humans). Before coming to the soil surface to scare and gross out humans, they migrate through the soil as large amoebae (called plasmodia) ingesting tiny bits of decaying debris, bacteria and other microorganisms. They are not associated with any plant disease. Rather, they are an important component of the soil ecosystem and indicate that there is a decent amount of moisture and organic matter in the soil. This is a good thing, because landscape plants normally do well in soil with ample moisture and organic matter. Undisturbed, they can last for weeks in the yard until a good rain washes the spores back into the soil. Animals, including curious children armed with sticks and lawn men with lawnmowers, will also hasten the weathering process by scattering their spores to the wind.

So try not to be repulsed the next time you spot these unsightly creatures in your yard. They are probably helping your landscape, and at the very least they are doing no harm.

A very good guide to beginning gardeners and arborists. One thing I can't stress enough when teaching about gardening is your placement. Look for whats above, behind, below, and what it could grow to block or overcome. Happy Gardening!

I was unable to make the live presentation today at 3:30 pm - any chance that someone video taped it for viewing later? Thanks!

Helpful knowledge.Especially 6 precaution. People should know about these things before hiring a contractor.Thanks for sharing highly valuable knowledge.
Foam Coating

Recycling helps the earth because it could save animals, it could save birds, puppies and all kinds of them. A lot of the animals that recycling helps to save are the ocean animals. There are a lot of animals in the ocean that mistake trash for food. They're eating things that we could be recycling. Check out this video: http://youtu.be/-H51E2gwXwc

This comment has been removed by a blog administrator.

Nice post. For having proper air in your home you got to be right with your ventilation works.

Have you read Teaming with Microbes? Good book that is doing a lot to help me understand the good side of fungus and all the other tiny stuff in the soil. Who knew?

I saw several nymphs this season for the first time ever. They are some of the more bizarre bugs to have in the garden, but I hope they'll have a good effect!

thank you for this post jane! really helped me out. I thought these were death killing bugs! Take care

We have the dog vomit slime mold for the first time in our yard as of this spring.

Thank you for this post, it is reassuring to see that what we are doing (organics ONLY) are making a difference!

Thanks Theresa, there was a host of the Slender Flattop Goldenrod, Euthamia Caroliniana, last Oct. in an open field now just knowing this species, and what I think is the Late flowering Thoroughwort, Eupatorium serotinum nearby in semishade making the bees crazy. Boca Raton, Fl. Eager-to-learn Master Gardener, Pat.

We have ongoing problems w/ this @ the city park where I work - I've tried rinsing the affected skin w/ hot water, which seems to help. I understand that cooking neutralizes the sting (people actually make tea from & even eat stinging nettle).

This is not the first of your posts I've read, and you never cease to amaze me.Thank you, and I look forward to reading more.

this is a lovely tree and I have a large one growing in my backyard, come see it email me at bcaptivated@gmail.com I also have some in 1 gall. pots.

What a cool looking mushroom. I think I will take the writer's advice and avoid walking in the dark woods to find it though.

I love both the beauty berry and firebush together. Always have flowers or berries, bright colors, drought tolerant to a degree... Nice plants!

You are welcome Becky- hopefully you don't find it!

I will be on the lookout for chamberbitter! Thank you for the description.

Thank you for the excellent tips. Not that I'm complaining about the rain.

I promise that the training sessions will be fun an informative. Legislature is a great challenge and incredibly rewarding. I hope you will join me to learn more.

I really like the pic of winter flowers. Your article is very well written cant wait to read more. Interesting Blog I really liked it.

Has there been any discussion as to why the population explosion of the spanworms occurred this year? Was it related to the very dry winter and spring (eliminating many wasps) followed by heavy rains which spurred the snowbush's growth?

Great links! Thanks for sharing!

Great tips. I recommend that all DIYers mow tall in summer just to avoid additional pressure on struggling turf.
Organic fertilizers work well in summer to avoid excessive growth, as long as they have plenty of time to break down prior to those heavy storms you mention.

That was an important point you made about fertilizer use during this rainy time. Suggest all use slow-release fertilizers to avoid excess run-off of nitrogen & phosphorus into our waterways.

Pam,
Thanks for such great details. For the 37th Edition of the Festival of the Trees blog carnival, we talked about Survivor Trees. Your post was a fitting addition to the "Hurricane" section!

If there are free seminars to be conducted in your community you must grab it. The skills that you will learn from it will benefit your for life.

Please direct all of your Lawn & Garden question to hort@pinellascounty.org or call (727)582-2110

I got to this page from reading your article about laurel oaks. I would love to chat with you about a problem that I am having with one of the oaks on my property- either by phone, or email. If you could oblige me, I'll send you my email address.

Now, back to reading about these orchids!

I am fully behind the termination of Sevin use for anything that might come in contact with any beneficial life forms.

I hope that this will be lots of fun!

Anyone know where I can get some good rain barrels? Not the plastic kind. I live here locally. Thanks! Kelli

Great Blog! If any of your readers are looking for Planters
or Window Boxes
there is a company called Hooks and Lattice that sells all different styles and
sizes. www.hooksandlattice.com

I briefly read this early this month and discarded it, but while in downtown ST Augustine I saw a palm with symptoms that could be a diseased palm. This was the other day in the plaza (used to be called the slave market). That would be a big jump from Manatee / Hillsborough County, but other palms around this specimen in the area are healthy and it has been in the ground for some time. It probibly is anouther disease or deficiency. I have been in the nursery/ landscape business for 30 years and hate to see the infections that are effecting our major trees, citrus, bays, palms, next? Craig Hartwig.

Jane Morse is a super cool Extension Agent. She really gets the job done!

Jane Morse is a super cool Extension Agent. She really gets the job done.