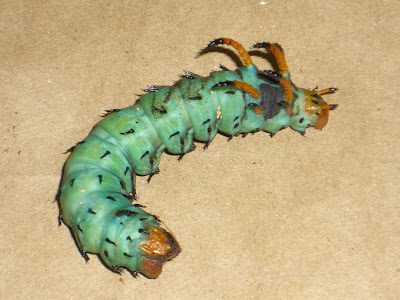 This imposing larva (caterpillar), known as the hickory horned devil, is most often observed when it is full grown and comes down from the trees to wander in search of a site for pupation. It can beome as large as a hot dog.

This large caterpillar will eventually become the regal or royal walnut moth, one of our largest and most spectacular moths. Like most other moths, it is nocturnal but is sometimes observed around lights at night. 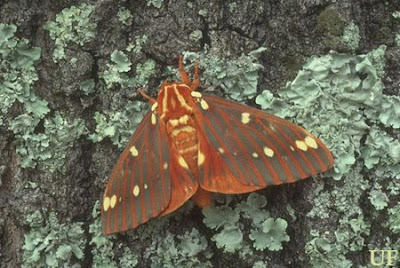 The regal moth typically has only a single generation per year. In Florida adults have been collected in May, but are more common during the summer.
The larvae live about 35 days and have been reported from a variety of host tree species. They are commonly found on species of the family (Juglandaceae) including walnut (Juglans nigra), butternut or white walnut (Juglans cinerea), and a variety of hickories (Carya spp.) including pecan. In Florida, larvae are frequently found on sweetgum (Liquidambar styraciflua). Other hosts commonly listed are persimmon (Diospyros virginiana) and sumacs (Rhus spp.).
In central Florida, larvae are usually found from late July to mid-August while they are wandering on the ground searching for a suitable location to burrow into the soil for pupation. The pupa is the overwintering stage.
The regal moth is a beautiful and fascinating member of our native fauna, and its larvae should NOT be killed. If a larva is found crawling on pavement or in an area of thick turf grass where it would have difficulty burrowing, it should be moved to an area of soft soil or a mulched area where it can burrow for pupation.
For more information see this website: http://www.entnemdept.ufl.edu/creatures/bfly/regal_moth.htm