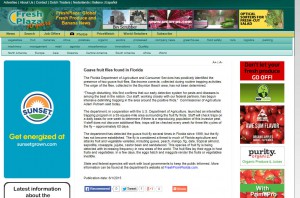 FDACS and the USDA have increased trapping around the detection area.

In the FDACS press release, Commissioner of Agriculture Adam Putnam emphasizes the value of Florida’s early detection system for pests and diseases.

The Guava Fruit Fly is a potential threat to several fruit and vegetable commodities.

Dr. Amanda Hodges serves as the Director of the DPM Program. Her position is 50% teaching and 50% extension. DPM overall administrative responsibilities and teaching the following courses are included in her duties: ALS 4161/6166; ALS 6925; ALS 6931; and ALS 6943. ...