Take a sneak peek with this excerpt from the article: Coconut scale, Aspidiotus destructor Signoret (Hemiptera: Diaspididae) (Fig. 1), is a pest of over 60 plant families and is found globally in tropical and subtropical areas (Davidson and Miller 1990, Ben-Dov 2014). This armored scale was described by Signoret in 1869 and appears to be native to South Asia but has spread around the world, mainly on infested coconut and banana (UK CAB International 1966). The insect feeds on plant sap from leaves, stems and fruits, causing yellowing, tissue distortion and die back. The coconut scale is a pest of concern on coconut and other perennial crops due to its relatively short life cycle of around 35 days and multiple overlapping generations per year. Coconut scale is known to be dispersed by birds, bats and insects as well as wind (Taylor 1935). 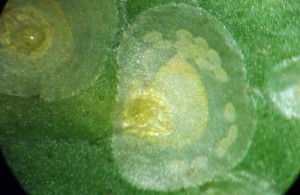