Take a sneak peek with this excerpt from the article: The potato tuberworm Phthorimaea operculella (Zeller), also known as potato tuber moth or tobacco splitworm, is an oligophagous pest (an insect feeding on a restricted range of food plants) of crops belonging to the family Solanaceae (mainly potatoes (Solanum tuberosum L.), tomatoes (Solanum lycopersicum L.), and tobacco (Nicotiana tabacum L.)). Phthorimaea operculella has been a minor pest of tobacco for more than 100 years. However, in North Carolina, this pest has emerged as a problem in tobacco plantings over the last five years. This pest has been reported in tropical, subtropical, and Mediterranean agro-zones. 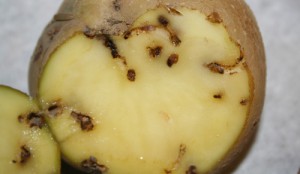