Profuse is an Understatement

Some trees flower, and some trees are nothing but flowers. A golden shower tree in bloom is a heaping mass of visually 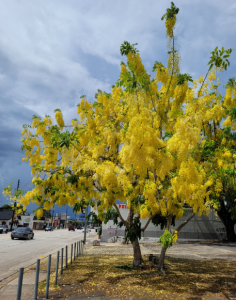 explicit plant reproduction. A living billboard for pollinators, this tree would be amorously whooping and hollering at passing insects if it had the ability. The flowers are fairly standard in terms of bean family morphology, but their outpouring in late spring into early summer are what makes this tree special to cultivators and onlookers. 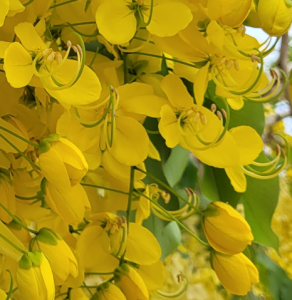 Flowers of the golden shower tree.

A member of the Fabaceae, many of the trees in this family are endowed with prodigious flowering abilities. Numerous bees and butterflies are known pollinators, but carpenter bees are particularly susceptible to the allure of golden showers. The flowers eventually produce large pods that encase seeds within a sweet, sticky pulp. Despite the toxicity of the seeds, birds, monkeys, and golden jackals have been found to consume and spread them.

A native to India and Southeast Asia, it is also the national tree and flower of Thailand and state tree of Kerala. A hardy tree that propagates from seed easily, it is often a popular ornamental tree where it can be cultivated. Outside of horticulture, its hard and reddish wood can be used in construction and cabinetmaking, and the pulp of the fruit is sometimes consumed by humans as a laxative. 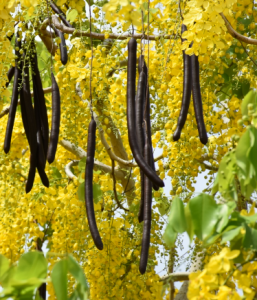 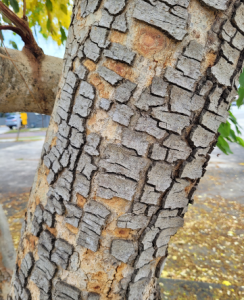 Bark of the golden shower tree.

We field a lot of questions at UF/IFAS Extension Orange County that amount to “What is this plant?” This is a strange one for the area. In the heart of Orlando, where the impact of the urban heat island effect is strongest, there are some specimens of this tree that are locally popular due to their aesthetic appeal along Mills Avenue. However, anyone wanting to grow this tree locally should consider the biological reality – they are quite sensitive to cold weather. Some trees suited for 10A can sometimes become common in the landscape in the warmer pockets of 9B, but this is a tree not recommended beyond 10B. They can sometimes grow relatively large in between frost intervals, but mature trees may be living on borrowed time in Central Florida. 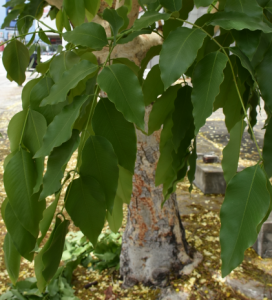 Foliage of the golden shower tree.

Golden shower trees prefer full sun and well-drained soil conditions. Root rot and mildew can develop under consistently wet conditions. This species is also relatively tolerant of drought and salt. This species is known to form codominant stems, so pruning while the tree is young is suggested to create a central leader and stronger form. The seeds are considered to be poisonous, so some precautions should be considered in areas where this tree may have regular exposure to pets or children.