Plumerias are a group of closely related flowering plants that are synonymous with “tropical.” Another name for these plants is “frangipani,” which sounds much more like the nickname of a bullied middle schooler. These plants can be grown from cuttings, and often look like sad, defoliated sticks upon planting. However, they grow fast – and like many uncool middle school students, plumerias grow into specimens that often outshine their mature peers in the landscape. Their prolific blooms make mature plumerias the prom queens of the garden.

There are at least 12 scientifically accepted species of plumerias, and many can hybridize. Flowers can range from pure white, to yellow, orange, pink, red, or some combination of these colors. The flowers are highly aromatic with a scent many would describe as floral, tropical, and pleasant. Despite certain moths being attracted to the flowers, these coquettish plants offer little to no reward to would be imbibers. Humans have probably had a much greater impact than natural forces on the selection and distribution of plumerias over a relatively short geologic time.

Often mistaken as a Hawaiian native due to their common use in leis, the plants are actually endemic to much of the Caribbean Basin. There is evidence that plumerias have been in cultivation throughout disparate corners of the tropical world prior to documented transoceanic travel. Due to their aesthetics, ease of propagation, and cultural significance, these plants have extended their range far beyond their original geography throughout the course of human history. Most plants tend to be dormant and lose their leaves in the winter months. However, once the leaves reestablish, the plants are prolific bloomers. With a trick taken out of the succulent playbook, the stems can remain green and carry-out photosynthesis when the leaves are not present. Despite dormancy in winter months, these plants can be prolific growers and will eventually range in size from shrubs to small trees.

Plumerias are suited to tropical climates, as they are not recommended for planting outside of USDA hardiness zones 10B-11. Most of interior Central Florida is within USDA Hardiness Zone 9B where tropical plants will be continually hectored by frost. However, this has not deterred many gardeners within the I-4 corridor from cultivating these cold sensitive plants for their tropical aesthetic and floral reward. Many central Florida residents have found luck (…even if it is just transient luck through windows between bad freezes) by growing Plumerias in protected areas. A combination of the climate change, urban heat island effect, and microclimate protection can potentially push the range of this plant outside of its recommended zones, but gardeners and landscapers should make their peace with nature and the potential for heavy damage or death of these plants. These plants can be susceptible to partial cold damage, but thanks to their weedlike vigor, some level of regeneration is often possible if the plant has not been killed to ground.

Rust is another persistent problem for many plumeria plants. This foliar fungal disease typically builds up on the underside of leaves throughout the growing season. If reduced levels of rust are desired for the next growing season, dead leaves can be collected and removed from the site in the fall. Some level of control can also be attained via chemical fungicides.

A member of the dogbane family (i.e., Apocynaceae), the sap of these plants contains harmful compounds that can irritate sensitive areas. Some consideration may be given to landscapes with pets and children, but this plant would not be considered to be particularly poisonous relative to other landscape plants (e.g., oleander) – there are no recorded cases of death from exposure to or ingestion of plumeria plants. 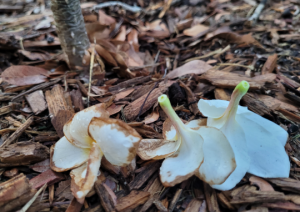