Skip Navigation or Skip to Content
Home » UF/IFAS One Health » S.H.E. IS: Christine De Pizan, An Early Feminist At The End Of The Middle Age

S.H.E. IS: Christine de Pizan, An Early Feminist at the End of the Middle Age 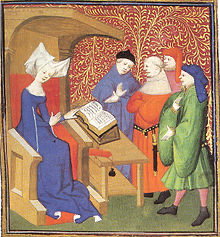 At age 15, she married Etienne de Castel who sadly died a decade later. After his death, she was left with three children to raise alone. Christine turned to writing to provide for her family. She began writing love ballads which gained popularity among wealthy patrons at the French Court.

An important text by Christine de Pizan is The City of Ladies.

She was a visionary who did not sketch an ideal image of women , but insists that women by nature are just as clever and gifted as men. In The City of Ladies, Christine, is in a dream-like state reading The Lamentations of Matheolus, a 13th century misogynistic text limiting women’s rights and role in marriage. This story upsets the narrator who is then visited by Reason, Rectitude, and Justice, who arrive to aid the narrator in correcting the discourse regarding women’s rights. Together, the narrator and her accomplices build a city against any possible assaults where different heroic women who have positions and opportunities in society.

Interestingly, this story connected to the S.H.E. Is Blog Posts as the intention behind these posts is to highlight powerful women forgotten in history. Christine de Pizan raised awareness on the importance of female role models through the stories of Reason, Rectitude, and Justice. This blog continues her mission of empowering women and uprooting misogynistic structures that devalue women in history.

Throughout this semester, researching and writing this blog has taught me the important role of history. Finding forgotten women whose actions shaped the modern world is vital. The protagonists of this blog are role models that empower future generations.

Personally, I discovered women such as Christine de Pizan who motivate me to push boundaries in my personal and professional life. I encourage anyone to search and discover influential figures that could inspire you to better the world around you. Eventually, you could be an important individual that future generations are inspired by.