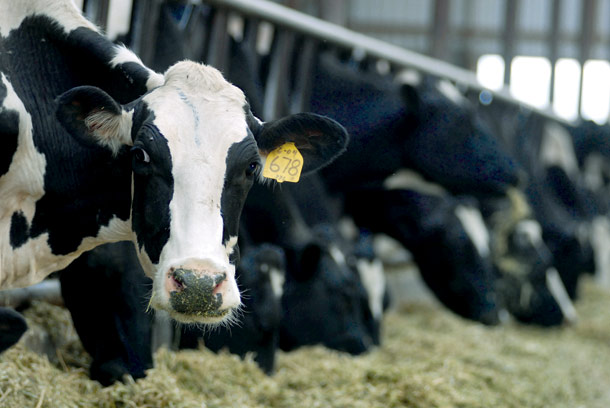 We know that nutrition during pregnancy is important for all animals. But dairy nutritionists are keenly aware of the importance of the diet during the transition from pregnant to lactating. Since production levels are high in many dairy herds, cows are susceptible to negative energy balance and hypocalcemia (milk fever) in early lactation. Hypocalcemia occurs when cows are unable to replenish blood Calcium (Ca) used for synthesis of colostrum and milk.

During the recent Ruminant Nutrition Symposium in Gainesville, FL, Dr. José Santos, University of Florida Department of Animal Sciences, discussed DCAD diets and their usefulness not only addressing hypocalcemia, but additional health benefits. DCAD stands for Dietary-Cation Anion Difference and prepartum cows should be fed diets with a negative value for DCAD. This type of diet is fed to dairy cows just before calving (about 2 weeks) to help them use Ca more efficiently from body reserves. Dr. Santos used his research and the research of others to come up with some consistent effects of feeding a diet with negative DCAD. One challenge during the transition period for dairy cows is feed intake. Appetite decreases in the last week of gestation and studies showed that there feeding diets with negative DCAD causes a further decrease in intake that is mediated by the changes in acid-base status byt not because of feeding acidogenic salts. Therefore, reduced palatability is not the cause of decreased intake. Postpartum, cows experiencing hypocalcemia are susceptible to additional health problems. Cows at a higher risk for metritis (difficult calving, still births, etc) were more able to overcome the disease if they had a normal level of blood calcium, whereas cows with hypocalcemia were at increased risk for metritis with or without calving complications. In a study in which hypocalcemia was induced, researchers noticed that blood glucose increased and insulin resistance was observed. They also showed that hypocalcemia decreased immune function. Forty eight (48) hours after the induction of hypocalcemia, white blood cells were less functional (measured by the phagocytosis of E. coli bacteria). Across studies, it was observed that older cows were at a higher risk of hypocalcemia (with or without a negative DCAD diet). However, cows with hypocalcemia were at greater risk for addition complications postpartum. There are still questions about the optimum levels of negative DCAD diets for dairy cows. However, feeding an acidogenic diet remains the best choice for minimizing hypocalcemia and the accompanying problems.