Born in Gainesville in 1934, Anne Cawthon Booth is a third-generation University of Florida alumna. She is best known as Florida’s first female appellate judge and first female Chief Judge, blazing a trail for others. 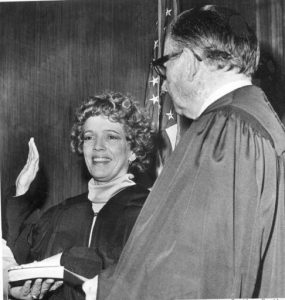 Anne was first in her class graduating from the University of Florida with a degree in agronomy in 1956. As the only woman in the graduating class, she led the line of students at graduation, an honor she recalls fondly.

Upon graduation, Anne was unsure of her next step. She took the summer off and decided she was going to go to law school. She applied to the University of Florida College of Law and was admitted. Anne recalls how strange attending law school was as a woman back then. People would often ask her, ‘What are you going to do? You certainly are not going to the court room.’

But she did just that. Anne graduated from law school in 1961 with high honors and in 1978, Anne was sworn in as Florida’s first female appellate judge, and she served in that role until her retirement in 2005.

In a previous interview with UF, Anne said, “Mother always said, ‘Everything you ever wanted was at the University of Florida. The courses were there; whatever intellectual pursuit you wanted to follow was there. You only had to find it.”