Floy Britt is remembered as an advocate for African American youth during a time when the Florida Cooperative Extension Service was segregated. According to Joe Busby, dean for Extension at the time of Britt’s retirement in 1967, “Floy Britt was a pioneer in the civil rights movement to bring equal opportunities through 4-H clubs for black girls in Florida.” 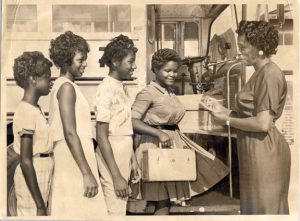 After graduating from Florida A&M University, Britt joined the Florida Cooperative Extension Service in 1932. She worked as a home demonstration agent in Hillsborough County, where she also supported African American 4-H clubs. A health educator by training, Britt helped establish urban gardens and taught food preservation to African American residents in Tampa, allowing them to produce and store extra food during the Great Depression.

Britt went on to become a local district agent, supervising all African American home demonstration agents in Florida and establishing the Florida State Association for Negro Home Demonstration Agents, providing professional networking and guidance opportunities. In 1949, she was instrumental in creating Camp Doe Lake, a residential camp in the Ocala National Forest for African American 4-H youth. Britt earned a master’s degree in 1954 and was the first and only state director of 4-H for African American girls until 1965.

In 1981, the Black Archives at Florida A&M University created the Floy Britt Memorial Room to honor her legacy, and she is a Florida 4-H Hall of Fame inductee (2002).