The year 2020 commemorates the centennial year of the passage of the 19th Amendment, a crucial achievement in the women’s suffrage movement. This milestone reminds us of the collective spirit marshaled to enact this change. Throughout the year, UF/IFAS is highlighting female researchers, educators, staff members, students and innovators who embodied a similar trailblazing spirit during their engagement with the university. These trailblazers left an indelible mark on both the university and the state of Florida. 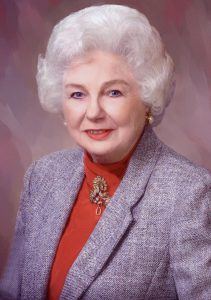 Vermelle “Vam” York is best known as a businesswoman and philanthropist whose vision and commitment left an indelible mark on UF/IFAS. Her support endowed a lecture series that has brought internationally distinguished faculty to campus, provided scholarships for College of Agricultural and Life Sciences (CALS) graduate students, helped to build the Roland T. Stern Learning Center at Austin Cary Memorial Forest and more.

Her generous efforts are familiar to Alachua County residents even beyond the university. She was involved in developing several residential subdivisions, and in 2005, the Gainesville Community Playhouse renamed its main stage facility the Vam York Theater, to honor Vam’s financial support.

Born Vermelle Cardwell in Evergreen, Ala., and better known as “Vam,” she met E.T. York Jr. in 1945 when the two were Auburn University students. They married in December 1946 and were inseparable until E.T.’s death in April 2011.

E.T. founded UF/IFAS and lived the land-grant philosophy of using knowledge for the betterment of mankind, and sparked Vam’s ongoing love of the organization’s mission. UF/IFAS Senior Vice President Jack Payne has often referred to Vam York as “the First Lady of UF/IFAS.”

Together, the Yorks have been invaluable benefactors of UF/IFAS, beginning in 1973 with a fund for supporting CALS through the E.T. York Jr. Outstanding Junior Award through today.

In 1988, the Yorks set up a professorship in International Agriculture that will one day advance the principles and commitments reflected in E.T.’s long and distinguished career in, and services to, international agricultural development. The Yorks have made provisions in their estate plans to continue their support to this fund for many years to come.
As Vam previously stated in an interview, “We cannot expect the state to always provide funds that are needed, and so they do need private support in every face of agriculture.”

The UF/IFAS York Distinguished Lecture Series lives on today, bringing to campus individuals who have achieved international distinction in agriculture or a related discipline.