Collapse of a Unique Bird–Snake Relationship on Seahorse Key

Our study focused on the unique relationship that exists between nesting waterbirds and venomous cottonmouth snakes (Agkistrodon conanti) living on Seahorse Key in the Gulf of Mexico. Historically, thousands of waterbirds across several species arrive on Seahorse Key to nest in March and stay until November. The nesting birds accidentally drop large amounts of fish that falls to the forest floor while they are present on the island. Cottonmouth snakes on Seahorse Key take advantage of this free food resource and are found waiting below nests for the fish to fall. These cottonmouths are thought to survive primarily by eating these dropped food items. 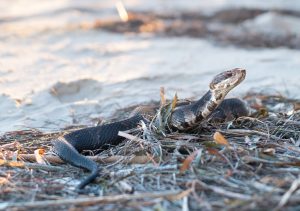 Suddenly and unexpectedly, the thousands of waterbirds that began nesting on Seahorse Key abandoned the island completely in April of 2015 and have not returned. Therefore, snakes are now left without the annual bird-provided food resources.

The objective of this study was to determine how the birds abandoning Seahorse Key would affect the snake population.

How do we track these changes? 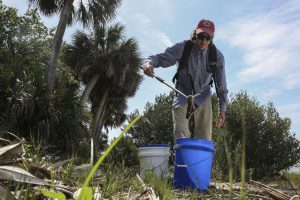 In order to measure changes in the snake population we compared measures of the snakes taken before (“pre”) and after (“post”) the birds abandoned. The primary measures of health for the cottonmouths in this study were body condition and snake abundance. Body condition is a ratio of an animal’s length to mass and is a good indicator of individual health. Snake abundance was measured by a simple count of the number of snakes observed in one two hour period after sunset along beach transects. 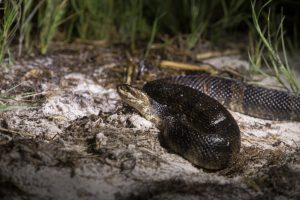 We compared the results for body condition and abundance between the pre- and post-abandonment periods and found snakes to be in a lower body condition, indicating poor health, and decreased abundance after the birds left the island. These results support the idea that snakes were dependent upon the food items provided to them by nesting waterbirds and that the loss of the nesting birds on Seahorse Key has had a negative effect on the cottonmouth population. It is not known how the snake population will survive into the future.