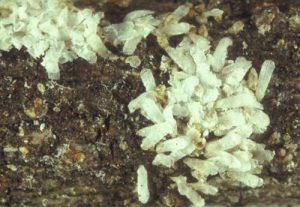 he white, covering the trunk of your tree is actually an insect. White peach scale, Pseudaulacaspis pentagona (Targioni), is believed to have originated in Japan or China, although one report places the point of origin in Italy where is was first described in 1886 by Targioni.

This insect is an important economic pest of peach trees as well as woody ornamentals in the southeastern United States. In the early part of this century, white peach scale destroyed numerous peach orchards in Florida and completely decimated a grove of 10,000 peach trees in South Georgia.

The white peach scale inhabits up to 121 host plants in Florida and can cause major economic damage. Some of the host plants identified are fruit trees, privet, mulberry, paper mulberry, catalpa, and Chinaberry. Thousands of dollars are spent each year on the control of this pest as infestation can become significant. The white peach scale will infest the bark, fruit and leaves of plants, thus making it a “triple threat” to growers. Control methods are often best directed at the larval or crawler stages which are the most vulnerable. Traditional methods of control have included various insecticidal oils as well as a number of other pesticides. This information is from UF/IFAS Featured Creatures: http://entnemdept.ufl.edu/Creatures/orn/scales/white_peach_scale.htm