Skip Navigation or Skip to Content
Home » UF/IFAS Extension Nassau County » What Types Of Eggplant Should I Grow In Florida?

What types of eggplant should I grow in Florida? 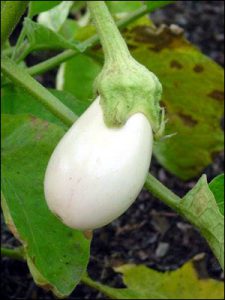 Eggplant, Solanum melongena, is a member of the nightshade family Solanaceae (Rindels 1997). It is called “eggplant” because the original plant produced small, oval-shaped white fruit resembling an egg. In 1806, Thomas Jefferson, well-known for his promotion of horticulture, introduced the eggplant to the United States after receiving the fruit from a friend in France.

There are heirloom varieties and hybrids. Seeds from the fruit of heirloom plants can be used year after year. Hybrid eggplants are produced from two genetically different purebred varieties. The offspring are selected for certain characteristics, such as resistance to viruses and other desirable characteristics. Hybrid seeds must be purchased each year.

Eggplant belongs to the same family of plants as tomato, tobacco, and pepper. This means eggplants are susceptible to many of the same diseases affecting this broad family of plants. Viruses such as tobacco mosaic virus and tomato mosaic virus can be a common problem. Harvest the fruits when they’re glossy. Green or mahogany-colored fruits are too ripe.

Varieties thriving in Florida include ‘Black Beauty’, ‘Dusky’, ‘Long’, ‘Ichiban’, and ‘Cloud Nine’. This information was gleaned from the University of Florida publication, “Heirloom Eggplant Varieties in Florida” by Monica Ozores-Hampton. http://edis.ifas.ufl.edu/hs1242