Skip Navigation or Skip to Content
Home » UF/IFAS Extension Nassau County » The Difference Between A Skink And A Lizard.

The difference between a skink and a lizard. 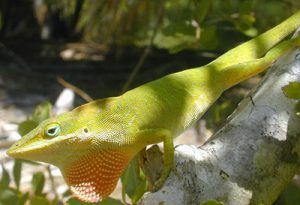 Both lizards (anoles) and skinks are classified in a larger sense as lizards. They inhabit similar environments (tree) and both feed on insects, spiders and small invertebrates which is why we categorize them as beneficial animals. Skinks are much larger and have distinctive color variations.

Skinks grow from 6 – 13 inches in length. They have almost not neck, large reddish-orange colored heads with darker brown-gray striped, stocky bodies. Their legs are short in comparison of their long bodies but don’t be deceived into thinking they cannot move fast – it will astonish you how quickly they can dart from one area to another. Like other skinks, the young have a bright blue tails and prominent stripes. Although adult male broadhead skinks are unmistakable, females and immature lizards are very similar in appearance to five-lined and southeastern five-lined skinks. Thus, small skinks are best identified by close examination of the scales: broadhead skinks have an enlarged row of scales under the tail and five labial scales situated along the upper lip between the nose and eye.

Although they may be found both on the ground and in trees, male broadhead skinks, are more often found in trees than any of the other southeastern skinks. The adults are often seen carried away by predatory hawks who snatch them with their talons from the tops of trees. Young skinks are commonly found on fallen trees and under mulch or other debris. When pursued, broadhead skinks generally run for the nearest tree or log and can be tough to capture. Like many other lizards, broadhead skinks will break off their tails when restrained, distracting the predator and allowing the lizard to escape. The most common skinks in our area are the Five-lined Skink (Eumeces fasciatus), Southern Prairie Skink (Eumeces septentrionalis obtusirostris) and Ground Skink (Scincella lateralis). http://srelherp.uga.edu/lizards/eumlat.htm

Green anoles, Anolis carolinensis, commonly grown from 5 – 8 in length with longer legs and thin necks. Anoles have much sleeker bodies. They also live in trees but can be found in most urban or suburban areas and occasionally inside the house. Don’t panic if they do get inside the house, just scoop them up and put them back outside where you and the anole will be much happier. Anoles may be either green or brown depending on environmental conditions. When brown, may have faint markings on the back. Males have a pinkish throat fan that is displayed in territorial rivalries or when approaching a potential mate. The green anole is most easily distinguished form the similar brown anole (Anolis sagrei) by green or lightly patterned brown coloration, and pinkish throat fan. The brown anoles were introduced here and are not native but they do the same job of eating insects and spiders.