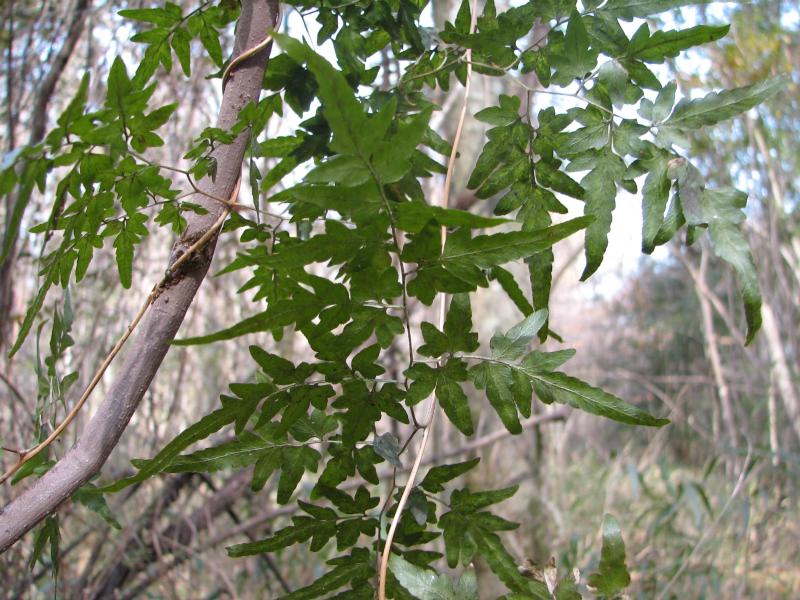 Japanese climbing fern has a vine-like growth pattern (actually a frond with a twining rachis) and can reach lengths of up to 90 ft. Fronds are feathery in appearance and have triangular, compound leaf branches that are opposite in arrangement. Leaflets are lobed and stalked. Leaves are light green and rachises are orange to brown. Rhizomes are below-ground and are black in color. Note the feather-like appearance of the leaves. This differs from Old World climbing fern. Photo: Ann Murray, University of Florida

Reproduction can occur by spores and self-fertilization. Spores are numerous, long-lived, and easily spread. Their abundance increases through the growing season, with peak spore release in October. Leaf branches near the bottom of the vine-like growth are sterile, but fertility increases in successive leaf branches. As a result, self-fertilization is also more common as the growing season progresses. Spread also occurs vegetatively via the rhizomes. Rhizomes spread and re-sprout after winter frosts and fire. There is no known effective biological control agent for Japanese climbing fern. Fire is also ineffective because the fern quickly regrows after being burned. Chemical control is the best means of controlling Japanese climbing fern. Products containing glyphosate and metsulfuron methyl are most effective and can be used in combination. Metsulfuron methyl is less damaging to surrounding native vegetation than glyphosate. Cutting or pulling vines and then applying herbicide to piles of vines can also help reduce damage to surrounding vegetation. When applying herbicide, it is important to use a surfactant to improve plant upstake. Herbicide application is most effective from July to October.

If you see Japanese climbing fern (or any other invasive species) be sure to report it using the Early Detection and Distribution Mapping System (EDDMapS) for invasive species. More information here.

If you are handling Japanese climbing fern, be careful not to contaminate new areas as spores spread easily. Be sure to bag any pulled vines before transport and wash any contaminated clothing.

← My small pine trees have with large areas of an orange colored powder on the trunks or stems.
Fact sheet: Ornamental Pepper →