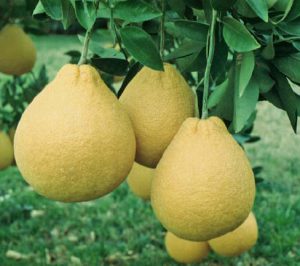 Pummelo, Citrus maxima, looks similar to a grapefruit but quite different. It is a very large, round to pear-shaped, yellowish orange fruit with very thick rind. The fruit is so large there have been records of fruit weighing up to 20 pounds; however each fruit is more typically around 5 pounds. Still, it is a large single fruit to hang from a tree by anyone’s standards.

Although it looks similar to a grapefruit the flesh is sweeter and less bitter. Because of the size of the fruit and the thick rind it is generally not a consumer favorite. Thus, you many have some difficulty finding it in local grocery markets or plant nurseries. Once the thick rind is removed the flesh divides easily into separate sections. Although it is important to also note the sections may differ in size and form on some of the pummelo cultivars.

The tree can grow to heights of 30 feet with an equally wide spread so consider its mature size when planting it in the landscape and allow enough space. Pummelo is typically grown in cold hardiness zone 9-11. When planting in the landscape provide as much sun exposure as possible but avoid areas where wind could be an issue. Fertilize as you would any citrus.

Some of the more common varieties of pummelo include: Chandler, Ichang, Red Shaddock, Reinking, and Webber. There are three new cultivars of pummelo which have been released to Florida citrus growers which means we should see them at the market.

One other important thing to know about pummelo – UF is working on producing a hybrid with grapefruit which will give you the peppery tang of the grapefruit but avoid the serious drug interaction problems typically caused by grapefruit. The UF professor’s findings have been reported in the October 2011 issue of the Journal of the American Society for Horticultural Science.