What is Hard Water?

Hard water is a result of dissolved minerals Calcium, Magnesium, and Manganese. Hard water is a very common problem, affecting water in more than 85% of the country (Water Quality Association).

The term “hardness” is applied to the soap neutralizing power of water. Hardness is usually reported in terms of an equivalent concentration of calcium carbonate which is the amount of calcium carbonate required to cause a hardness equal to that caused by all the substances producing hardness in the water. According to the Water Quality Association, there are four categories of water hardness. When the calcium concentration is more than 10.5 grains per gallon, or 180 ppm, the water is considered very hard.

Water Hardness in the U.S.

This map illustrate data from 1975. Although it is dated, water hardness is based on major-ion chemistry concentrations. Major-ion chemistry in groundwater is relatively stable and generally does not change over time. These data have been found to be accurate and useful in current assessments.

Calcium concentration is usually high in Florida’s groundwater. It is mainly because the karst topography. Karst is a type of landscape that is formed by the dissolution of the underlying carbonate rocks. Deep below the ground in Florida lies a layer of porous limestone known as the Floridan Aquifer System. Florida’s limestone platform is honeycombed with underground fractures, cavities and tunnels filled with fresh water. This vast subterranean reservoir is called the Floridan aquifer system. The water stored in an aquifer is referred to as groundwater. Scientists estimate that more than a quadrillion gallons of groundwater are contained in the aquifer. 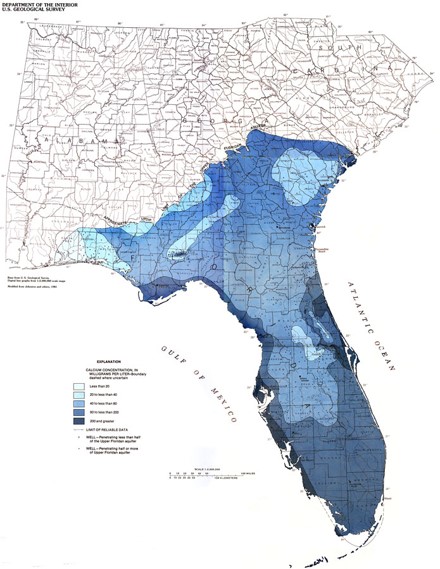 What are the advantages  and disadvantages of Hard Water?

The major disadvantages of hard water are related to washing, soap scum in sinks and bathtubs, spots on dishes and shower doors, as well as plumbing, such as clogged pipes from buildup of minerals.

Public water supplies are typically softened if hardness values are greater than 200 ppm. Lime softening is a water treatment process that uses calcium hydroxide, or limewater, to soften water by removing calcium and magnesium ions. In this process, hydrated lime is added to the water to raise its pH level and precipitate the ions that cause hardness.

Water hardness is not a contaminant. Treatment is a personal preference. Hardness level below 7.0 grains per gallon, or 120 ppm will probably not cause major scaling and soap film. Chemical precipitation and ion exchange are the two softening processes most commonly used.

Ion exchange systems are often referred to water softeners. Because water softening devices have long been available in the water treatment industry, the technology is highly developed and works well to reduce the hardness level.

How does ion exchange work? A physical and chemical process filters the water through an exchange media known as resin. Typically, the resin is a synthetic or natural, sand-like material coated with positively charged sodium ions. As the calcium and magnesium dissolves into positively charged ions, an ion exchange environment is created. The water flows through the unit while the resin releases its sodium ions and readily trades them for the calcium and magnesium ions. The water flowing out of the device is now considered soft. (Penn State Extension)

The major disadvantage to water softening is the potential health risks for people on low sodium diets. Sodium is added to the water as hardness (e.g. calcium) is removed.  Researchers have found the risk appears lowest when the drinking water contains lots of minerals and highest when the water is soft. Consumers may want to consider installing a bypass to the kitchen water supply for cooking and drinking.

Considerations Before Purchasing A Water Softener

Questions to ask before you purchase a water softener:

Although many brands and models of ion exchange units exist on the market, they all essentially perform the same with minor differences in extra features. Most softeners are not rated for effectiveness, only for convenience features like size, maintenance requirement, and personals preference.

Two types of chemicals used to soften water for home laundry are Sal Soda and Calgon.

Permanent magnetic water conditioning devices have been marketed based on a variety of claims regarding their effect on water hardness and related scale formation. The Water Quality Association has not been able to determine standards for these products and report inconsistent performance to date. Research has shown no change occurs in the physical and chemical properties or the calcium ion concentration of water treated with the devices (The Water Quality Association Magnetics Task Force, 2001).

Webinar Recording: What is Hard Water?

Watch the webinar recording to learn more about hard water. This webinar was conducted in 2021, as part of the Florida Well Owner Network webinar series.

If you like our webinar, please share with your family and friends. We would also greatly appreciate if you could complete the evaluation survey and tell us how we can improve our series. Link to the survey: https://ufl.qualtrics.com/jfe/form/SV_aWRDK1pBqIt9gEu