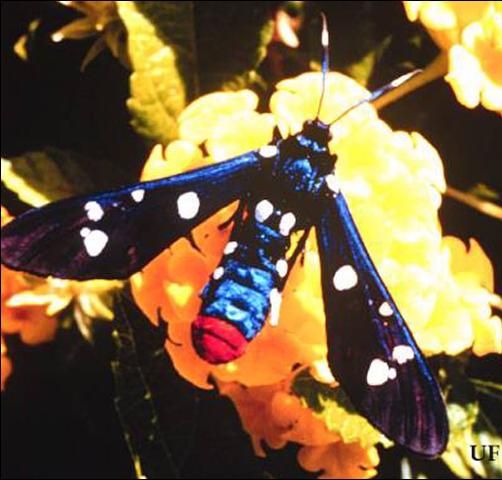 You might be surprised to learn that those colorful little wasp-like moths that frequently enter your butterfly garden are responsible for those hairy orange caterpillars that can defoliate an oleander shrub or desert rose in a flash.

The adult stage of the oleander caterpillar, Syntomeida epilais Walker, also known as the Uncle Sam moth or polka-dot wasp moth, is small and iridescent blue/green with a reddish abdomen and small white dots. It is active in the daytime, flying slowly from flower to flower.

Just before sunrise, and after an ultrasonic

courtship, the female deposits her pale yellow eggs on the underside of oleander and desert rose leaves. Young larvae are gregarious and feed together, turning new sh Oleander caterpillars will not kill plants but they can cause unsightly damage. The best time to control these pests is when they are young and feeding in groups so that infested foliage can be easily removed. Seal the cuttings in a plastic bag and freeze to kill the larvae. Be sure to wash your hands thoroughly to remove the poisonous oleander sap. Larger, solitary caterpillars can be removed by hand and then frozen or dropped into a bucket of soapy water.

Since these caterpillars consume the poisonous oleander, birds and small animals do not feed on them. However, these insects are susceptible to various viral, fungal and bacterial diseases, and their natural enemies include predatory stink bugs, parasitic flies and wasps, and fire ants.

A least toxic insecticide, such as Dipel or Thuricide (Bacillus thuringiensis) are recommended as a bacterial stomach poison for the caterpillar chewing the oleander leaves.

These links were current as of May 2013.