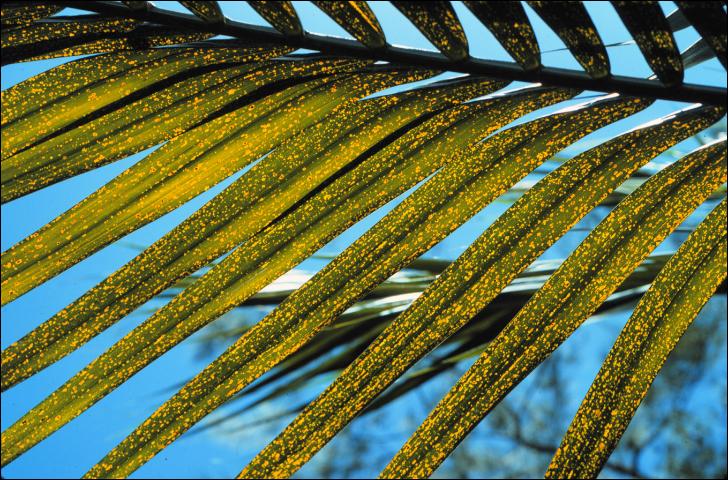 Have you ever seen a palm with a trunk that tapers to a point like a pencil?

This may indicate one of the following problems: 1) a Potassium (K) deficiency, 2) overpruning or 3) Nitrogen (N) deficiency. s are a common problem for South Florida palms. Potassium deficiency symptoms always appear first on the oldest fronds, and are more severe at the tip of the frond than at the base. The symptoms vary by palm species and may include chlorosis (yellowing), necrosis (browning), spotting, and/or frizzling. Mild potassium deficiencies can be treated and prevented by a regular palm nutrition program, while severe problems demand more aggressive treatment. A pencil-pointing palm that shows signs of both chlorosis and necrosis is probably suffering from a late-stage potassium deficiency. Another indication of this nutritional problem is a reduction in the number of leaves in the canopy. Left unchecked, it could kill the palm if not fertilized. Learn about palm Potassium (K) deficiency visit: http://edis.ifas.ufl.edu/EP269 Remember that it may take a couple of years for the palm to look healthy again, but patience will pay off. rricane pruning” of palms can also cause pencil-pointing because this practice weakens the plant by robbing it of nutrients. Potassium can translocate within the plant, moving to the new growth from the older leaves as they brown. The proper way to prune a palm is to remove only the dead fronds and retain all fronds that are held above the horizontal plane (like the 9 to 3 position on a clock). caused pencil-pointing is uncommon in the landscape palms versus a nursery situation. If the palm is chlorotic but shows no sign of necrosis, it may be a shortage of nitrogen. This can be treated by following a regular palm-special fertilizer program. http://edis.ifas.ufl.edu/EP261 Yellowing leaves should regain their green color within a few months.

For more information about palm problems check out:
http://flrec.ifas.ufl.edu/palm_prod/palm_problems.shtml