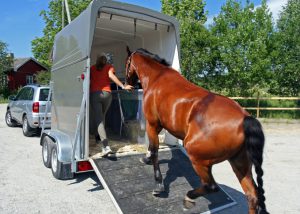 Saturday afternoon May 2, 2009 just prior to the 135th running of the Kentucky Derby, much attention was given to the fact that “Mind That Bird” was hauled 1,700 miles in a horse trailer pulled by a pickup truck driven by his trainer, Chip Woolley. While watching the pre-race TV coverage, it seemed every reporter that interviewed Mr. Woolley was fascinated the trainer had personally driven his horse from New Mexico to Kentucky. So much, in fact, that Mr. Woolley’s first comment to the gaggle of trackside reporters after his gelding’s impressive upset was “Now maybe you all will talk about something else.”

I know horses travel by commercial vans, tractor-trailers and even air-transport, but the reality is most horses in the United States are transported in a horse trailer driven by their owner. Hauling horses requires more than just good driving skills. The driver should not only be experienced with the nuances of transporting large animals, but should also be a bona fide horseman or horsewoman.

To start with, make sure the towing vehicle is the correct size for the trailer you will be using. Just because you can hook up to a trailer does not mean your vehicle is suited to pull that trailer, especially when loaded. Be sure truck- to- trailer connections are secure and safety chains are attached.

Many precarious situations can be avoided by taking a few extra minutes to check all tires, including spares for air pressure, uneven wear and dry-rot. Look over the trailer for excessive wear and tear. Check for wasp’s nest, spiders and other critters that might have moved in while the trailer was idle. Inspect the floor as well as all windows, doors and latches. Test all lights, turn signals and brakes before loading horses. 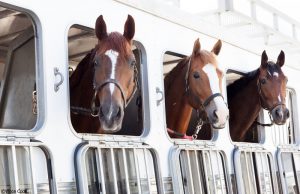 I’ve learned some of these horse hauling lessons “the hard way”. Back in the day, when I was a college freshman, I used to break and train horses for extra money. One of my clients had two horses outside of Louisville and asked me if I would be interested in going up there to get them. He wanted one delivered to his place and he wanted me to take the other one for a couple of months. He was willing to pay me, instead of a commercial hauler. On my way home, while stopped on the exit ramp at the Shepherdsville truck stop, my entire truck and trailer shook violently. I thought someone had hit me from behind and got out to check the damage. To my surprise, I had not been hit, but when I looked in to check on the horses they were both standing on the asphalt.

The trailer I was pulling had not been used for a few weeks and the floor, consisting of pressure treated 2 x 6’s had several rotten boards that had given way under the weight of the two horses I was hauling. Now, here I was, alone, on an exit ramp and two horses that belonged to someone else were standing on the ground while inside my trailer. The horses were calm as I backed them off and tied them to the side of the trailer while traffic continued to pass. I was able to remove the busted boards and slide enough good boards together to load the horses on the trailer safely. Once the horses were back on the trailer, I drove to the truck stop and called a friend to come with his truck and trailer to haul the horses home. The horses arrived at their destinations none the worse for wear and I learned a hard lesson about the importance of checking your equipment and being responsible for someone else’s horses.

A few weeks later, as I was following a livestock trailer up the entrance ramp to the interstate, I noticed a horse loose in the trailer. The trailer had one large swinging door that was equipped with an internal sliding door. The large door was latched and fastened securely, but as the trailer made its way up the ramp the sliding door kept opening wider and wider. The sliding door had not been latched and the banking of the ramp combined with the vibration of the road set up the prefect circumstances for the door to slide open. As the truck leveled out and started to merge into traffic, the horse stepped out of the trailer onto the interstate. The driver had not seen his horse step out of the trailer and continued to pick up speed.

The horse was right in front of me and fortunately went to his right, toward the shoulder of the road away from the median and oncoming traffic. I tried to get the driver’s attention by flashing my lights and blowing the horn, but he never saw me. I was slowing down, trying to keep my truck between the traffic behind me and the loose horse on the road. When the driver of the tractor-trailer beside saw what was going on he pulled up beside me and slowed to a stop as I got out of my truck to catch the horse or at least keep him from running back to the road. About that same time, I noticed the trailer the horse was previously riding in had stopped about a quarter mile down the road. Thankfully, someone up ahead had been able flag them down.

The horse was surprisingly calm as I approached him and he allowed me to grab his halter without incident. The horse’s owner was sheepishly pale as he approached and thanked me for stopping to help. What he said next, made a huge impression on me and it’s something I’ll never forget. His comment was “They told me I was good to go!” Lesson learned. Don’t take someone else’s word for “good to go”.

Make a habit of conducting a walk around inspection every time you hook up. This exercise is important for all trips and is extremely crucial for trailers that have not been used in several days or weeks. Ultimately, it is the driver’s responsibility to ensure the safety of the horse(s) they are hauling.