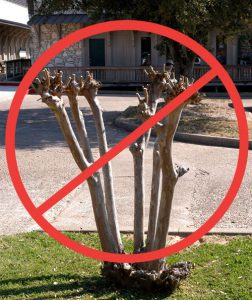 Crape myrtle is a very hardy plant for central Florida, with few cultural problems It is a good thing, for this plant is frequently mistreated, yet survives on toughness. Perhaps the most common malady the plant is asked to overcome is improper pruning which leads to poor structure. Typically this isn’t a problem until we get windy conditions. The heavy, lengthy weight the plant is asked to support, along with poor branch attachment because of the improper pruning practices, leads to limb breakage. Fortunately the crape myrtle doesn’t become large, so branches are unlikely to damage your vehicle or the roof of your house. Still limb breakage opens the plant to disease and the resulting misshapen appearance is difficult to overcome.

February is the time crape myrtles should be pruned as the absence of leaves makes it possible to assess the needs of the plant. Pruning should be undertaken to enhance plant form and structure which typically means a light pruning.

Proper pruning probably will take a little time – 20 to 40 minutes for each plant. Begin by assembling the proper tools. You will need a good set of hand pruners and a set of loppers for larger branches. Check pruning tools to be sure they are sharp and if necessary use a file to sharpen the cutting portion of the blade. As you approach the plant, study it from a distance for any obvious limbs that will need removal. Move closer and from under the plant, look through the main structure for any crossing branches – often these are branches that grow toward the inside of the shrub and rub across other branches. This rubbing removes the bark of the limb and exposes the plant to disease problems. Remove any crossing branches. When removing branches, fall back to where the branch forks and make your cut to the outside of the fork, but along the line of attachment. Check at the base of the plant for any suckering sprouts that sprang up the previous summer and remove these also. Next look upward, into the crown of the plant and remove branches that are crowding other branches. As you make pruning decisions, try to envision the direction of growth the plant will have in the coming year. Are there branches that should be removed now to prevent problems this summer?

As crape myrtles mature pruning entails a lot of ladder work, so focus on ladder safety. Be sure the ladder has secure footing before you ascend, avoid the temptation to overreach, rather than climbing down and moving the ladder and don’t climb higher than the manufacturer recommends. Don’t schedule too much work in one day – quit when you become tired or when the job becomes too monotonous. Because I have several of these plants, I have found it helpful to schedule my pruning activities over several weekends in February, rather than trying to cram all the pruning into one day.

Pruned properly, over time crape myrtles will develop a very pleasing form and will have structural integrity to withstand high winds. A tough plant, they will add value and beauty to your property.

David Holmes has over 30 years experience with the Extension Service and was appointed County Extension Director in Marion County in 1996 with an appointment in Commercial Horticulture. He has served since that time as County Pesticide trainer with licenses in Private Agriculture Application and Ornamental & Turf. ...