Getting Ready for Breeding 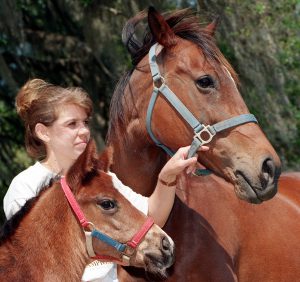 Even though horses are faster, stronger, and more competitive (as a whole) than at any other time in history, equine reproductive efficiency is the lowest of all domestic animals. For owners and managers whose primary concern is “settling” mares and maintaining pregnancy, a thorough understanding of the broodmare’s annual reproductive cycle is essential.

Most breed registries use January 1st as the official birthday for all foals born within a given year. Since horses typically compete by age (especially in their first 5 years) most breeders strive to have foals born as close to the first of the year as possible. Gestation in mares is approximately 343 days. To predict expected delivery date, first determine the day of ovulation then add one year (365 days) and subtract 22 days. For instance, a mare that has been bred and ovulates on February 22 will be due to foal on January 31 of the following year.

1) Anestrus – Period of reproductive incompetence, no estrous cyclicity, no follicle development or ovulation. Usually occurs from November to January in the northern hemisphere.

2) Vernal Transition – Period when mares begin to renew reproductive processes. This is a slow process that requires several weeks or even months to complete. Most mares begin to show some signs of increasing reproductive activity soon after winter solstice (the shortest sunlight day of the year). The long, sporadic periods of heat that precede the first ovulation likely explain a great deal of poor breeding results since they occur well before the first ovulation of the year. Mares will not become fertile until they ovulate, even though they may be receptive to the stallion. It is extremely important to know when a mare has her first ovulation of the season. No real pattern can be noticed until the mare ovulates for the first time.

3) Breeding Season – The first ovulation of the year signals the end of vernal transition and marks the beginning of the breeding season. For horses in the northern hemisphere the average time of first ovulation is the first week of April. A good indication of first ovulation and that a mare is beginning to cycle normally is following a period of sporadic heat, the mare will go out of heat and remain out of heat for 14-16 days before coming back in heat. All signs of heat usually end quickly one day after ovulation. Correctly detecting when a mare is in heat is essential in order to breed her at the most optimal time.Studies on large type horses show that only 25 percent of mares are ovulating in February when the breeding season opens. These same studies show 55 percent of mares ovulate in March, and that 94 percent of mares ovulate in April. Ovulation rates remain above 90 percent through August. Mares’ ovulation rates steadily decline September through November, and are down to 40 percent by December. January ovulation rates are the lowest of the year, bottoming out at only 20-25 percent.

4) Autumnal Transition – This is the most difficult period to define and is highly variable in timing. This phase begins once the last ovulation of the year has occurred. The only way we know the last ovulation is that no more ovulations occur. However, usually by the time of year autumnal transition occurs, most broodmares have either been confirmed pregnant, or the breeder has given up for that particular breeding season.

The pineal gland is a small organ shaped like a pine cone (hence its name). This gland is composed of “pinealocytes” and glial cells. In older animals the pineal gland often contains calcium deposits. Light exposure to the retina is first relayed to the nucleus of the hypothalamus, an area of the brain well known to coordinate biological clock signals. Fibers from the hypothalamus descend to the spinal cord and ultimately project to the superior cervical ganglia, from which neurons ascend back to the pineal gland. The pineal gland transduces signals from the sympathetic nervous system into a hormonal signal. This gland synthesizes and secretes melatonin, a structurally simple hormone that communicates information about environmental lighting to various parts of the body.

The effect of melatonin on reproductive systems can be summarized by saying that it is anti-gonadotropic. In other words, melatonin inhibits the secretion of the gonadotropic hormones, luteinizing hormone (LH), and follicle stimulating hormone (FSH) from the anterior pituitary. Ultimately, melatonin has the ability to entrain biological rhythms and has important effects on reproductive function of many animals. Synthesis and secretion of melatonin is dramatically affected by light exposure to the eyes. The fundamental pattern observed is that serum concentrations of melatonin are low during the daylight hours, and increase to a peak during the dark. (Bowen DVM, PhD; Colorado State University)

Due to the fact that most mares do not have their first ovulation until April, and most breed registries use January 1st as the official birthday for all foals born within a given year, owners and managers of broodmares may want to use “artificial light” to advance the onset of the breeding season. It is important to allow time for the influence of artificially long daylength to be expressed and to allow time for natural progression through the normal events of vernal transition. Remember, this take several weeks up to a couple of months to complete.

The simplest most effective management tool for getting mares to cycle before their natural breeding season is the use of extended daylength. To advance the onset of breeding season into mid-February instead of late March or April, mares in the northern hemisphere should be started under artificial light no later than the first of December. The response is not immediate. Most mares will show a behavioral reaction, such as shedding, 30 to 60 days after the program is started. The mare’s first ovulation should occur 60 to 90 days into the program. Research shows that the time of year this program is started appears to be more important than the type of program used.

How much light is enough? Add 2 1/2 hours of light at the end of the day (sunset) at a rate of 10 foot candles. Ten foot-candles is defined as the amount of light of 10 candles from a distance of 1 foot. The practical estimate of this is the amount of light generated by a single 100 watt bulb in a 12’ X 12’ stall. Mares may also be put under “artificial light” in large paddocks. When lighting large paddocks, make sure there are no “dark” areas where mares can escape the “artificial light”.

Use a single reflex lens camera with through-the-lens metering to determine if enough light is present. Cover the lens with a plain white Styrofoam cup (no letters), set ASA to 400, and shutter speed to 1/4 second. Walk around stall or paddock and check for dark areas. Aperture should read 5.6 in all areas. If aperture is 5.6 or greater, enough light is present. If the aperture reads less than 5.6 increase the intensity of the light. A little less scientific method to measure the intensity of the light is the newspaper test. There will be enough light to stimulate the mare if there is enough light to comfortably read a newspaper.