“What is causing these large mounds of dirt in my pasture and how do I get rid of them? One of my yearlings stepped in one of the holes and twisted her ankle. I’ve tried dragging the pasture, but the mounds seem to come back overnight and I never see anything making them. Is there anything I can do to get rid of these annoying piles of dirt and holes in my pasture?” The farm owner explained to me, she had been dealing with this problem for two or three years and had been unsuccessful in ridding her pasture of these troublesome mounds. Her frustration had recently reached its peak when one of her “best” yearlings had to be scratched from a sale because it now had a swollen ankle as a result of stepping in one of the holes. So began our discussion of the cause and control of this pasture problem.

The southeastern pocket gopher (Geomys pinetis) is also known as “sandy-mounder” or “salamander”. It’s known as a pocket gopher because of the fur-lined cheek pouches the gopher uses to carry food. Tan to grayish-brown with light colored feet and hairless tail, pocket gophers range in size of 9-12 inches from nose to tail. 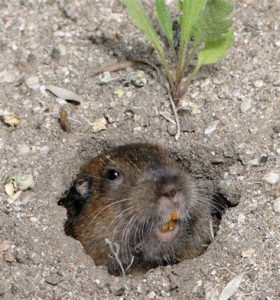 Gophers dig extensive tunnel systems and are usually not seen on the surface. They are active year round and may burrow at any time of day. However, gophers are most active in the spring when they may construct up to three mounds a day. Additionally, they seem to be more active around dusk and at night.

Gopher tunnels are slightly smaller than an average person’s forearm and run parallel to the surface. Most tunnels run between 2 inches to 2 feet in depth with some lateral extensions for food storage and nesting reaching more than 5 feet below the surface. Average tunnel length is 145 feet and at least one tunnel was followed for 525 feet.

As it digs, the gopher pushes the loose soil behind itself and then turns around and pushes the soil up a tunnel terminating at the surface (this process produces the mound in the pasture). Once the main tunnel extends past the first tunnel, another lateral tunnel is dug to the surface and the first lateral tunnel is backfilled to block it off from the surface (this process results in the rows of gopher mounds on the surface). Just because there are numerous mounds in a pasture doesn’t mean there are the same number of gophers. Remember, a single gopher can build up to three mounds a day. The backfilling of the tunnel is the gopher’s primary defense against its main predator, the Florida pine snake.

Gophers reach sexual maturity at about 6 months of age. They usually have one or two litters per year with one to three young per litter. Breeding is most common in March, July or August. Gopher nests of shredded grass are located in the deepest part of the tunnel system, 2-5 feet below the surface. Their underground lifestyle and lack of natural predators allows the gophers’ relatively low reproductive rate to sustain gopher populations.

The soil gophers bring to the surface contains nutrients leached from surface soils. This natural fertilizer helps to maintain the sandhill ecosystem. The mounds of loose soil provide needed germination sites for some native plant seeds. Many amphibians and reptiles use pocket gopher mounds as homes, including Florida’s unique mole skinks. The pocket gopher tunnels themselves serve as habitat for many unique invertebrates found nowhere else. Gophers should be maintained in natural areas as well as other non-livestock areas such as rights-of-way for power lines and roads.

When southeastern pocket gophers damage pastures, lawns or gardens it may become necessary eliminate them. Gopher traps are effective and several types are available commercially. Like I told the farm owner that called me, the most important part of trapping a gopher is locating an active tunnel. Look for the freshest mound you can find, push the dirt back and probe the area with a trowel or rod.

Once the tunnel is located, dig it out with something like a serving spoon until all the dirt is removed. You may have to go as far as your elbow or deeper to open up the tunnel. After the tunnel is dug out, insert the trap and check it later the same day or first thing the next morning. If an active tunnel is cleaned out, the theory is the gopher will come back to refill the tunnel and in so doing be caught in the trap. Successful trapping of just one gopher can make a significant difference in the amount of mounds you see your pasture.