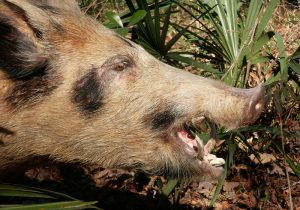 Wild populations of feral hogs are descended from domestic animals that escaped from captivity. Feral hogs are first thought to be introduced to the Southeast by Spanish explorers as far back as the 16th century. European wild boars were introduced during the early 20th century for hunting purposes. Once escaping they interbred with already present feral pigs to create the animals we have today.

Feral hogs are invasive pests that are responsible for serious damage to agricultural crops, native vegetation and wildlife. They can range between one-hundred and five-hundred pounds, with some becoming far larger. They spread quickly due to their ability to reproduce and survive easily in the wild. They are capable of breeding as young as six months of age. Hogs often have multiple litters per year with each litter containing up to a dozen piglets. Pigs are omnivores, meaning they consume a variety of vegetation, insects, small mammals, reptiles, eggs, and, occasionally, even deer fawns. The primary economic damage they cause includes rooting up agricultural fields, food plots, and tree seedlings, as well as carrying diseases that can be transmitted to domestic animals and humans. Their rooting in the ground creates large holes in fields or dirt roads which impedes movement of vehicle and equipment. Feral hogs also strongly compete with native species such as deer and turkey for food and territory. Not only will hogs compete with native species for food, they will also eat small reptiles, mammals, and amphibians. Feral hogs are known to be a serious threat to ground nesting bird’s eggs and even to sea turtle nests of coastal regions. Feral hogs carry diseases, like brucellosis, pseudorabies, and trichinella that can be transmitted to domestic animals and humans. If transmitted to a hog farm, the infected animals would need to be destroyed, creating losses for the farmer. Hogs will also wallow in creeks, creating muddy, contaminated water, causing harm for aquatic fauna inhabiting creeks and streams.

Methods for controlling feral hogs include fencing, live trapping, and through hunting. However, these methods are often individually ineffective because of the hogs’ intelligence and rapid ability to reproduce. Hunting hogs with firearms and dogs is another method of control. Due to the fact that feral hogs are a non-native species, there is no closed season, bag or size limit when hunting on private property. Live trapping can be the most effective method of curtailing hogs. Traps are typically large rectangular cages with a guillotine style door that will drop when the hogs set off the trap. Corn-based baits are often effective bait for attracting and trapping hogs. The nation’s hog population is increasing every year and they are spreading into states where they have never been before. The best method of controlling feral hogs is to prevent them from being introduced to your property. If feral hogs do appear, they should be aggressively trapped and hunted in every legal way possible.