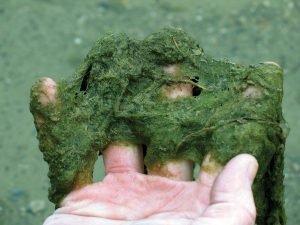 Algae seems like a waste, but do you know biofuel produced by algae? Microalgae are an ideal biodiesel feedstock, which eventually could replace petroleum-based fuel due to several advantages, such as high oil content, high rates of production, less land, etc.

Currently, algal biodiesel production is still too expensive to be commercialized. Due to the static costs associated with oil extraction and biodiesel processing and the variability of algal biomass production, cost-saving efforts for algal oil production should focus on the production method of the oil-rich algae itself. This needs to be approached through enhancing both algal biology (in terms of biomass yield and oil content) and culture-system engineering.

In addition, using all aspects of the microalgae for producing various value-added products besides the algal fuel, via an integrated biorefinery, is an appealing way to lower the cost of algal biofuel production. Indeed, microalgae contain a large percentage of oil, with the remaining parts consisting of large quantities of proteins, carbohydrates, and other nutrients. This makes the post-oil extraction residue attractive for use as animal feed or in other value-added products. You can find more information here.