From the ‘Garden Bench’: The Lovely Damselfly

The damselfly, as well as the dragonfly, has been around for close to 300 million, yes, that’s 300 million, years! Maybe that is why there currently seems to be such a keen interest in becoming a dragonfly/damselfly enthusiast.

Similar to bird watching, groups of people are coming together to spot these insects. We are lucky enough to live in a state that is home to over 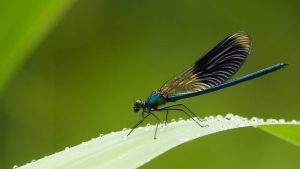 What is the Damselfly?

The damselfly begins its life cycle as an egg. These eggs can be look like a tiny grain of rice or really teeny-tiny mangos. The insect lays its egg in one of three ways: within a plant, on the surface of a plant, either on water or land. The eggs can be laid in groups as numerous as 1,500. Some females may lay several thousand eggs in a lifetime! Normally the eggs will hatch within seven to eight days. 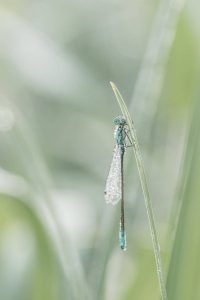 they live mostly in watery habitats. Some have been known to survive even in salt water. These youngsters have a voracious appetite and will eat everything from mosquito larvae to juvenile frogs and fish.

Molting will occur a number of times before the damselfly reaches adulthood. In Florida, the damselfly might produce many generations per year, especially if it’s a rainy year.

The final molting occurs on land. The naiad will crawl from the water onto a plant or higher ground when they are ready to become adults. The insect needs to pump its wings, similar to that of a butterfly emerging from a chrysalis. They also have to let their little bodies harden so that they can be strong fliers.

I discovered an easy way to identify a damselfly. If it sits with its wings pressed together over the top of its thorax, then it is a damselfly, as dragonflies sit with wings outstretched and separated.

Another way that might help identification is to think of what a damsel is to a dragon. Small, petite and weaker, compared to a large powerful and really big creature. Damselflies also prefer to perch, rather than continuously flying about.

More information can be found at: https://entnemdept.ifas.ufl.edu/creatures/misc/odonata/odonata.htm

Alyssa Vinson is a Horticulture Extension Agent in Manatee County. While not a Florida native, Alyssa has lived in Florida for almost 20 years, exploring Florida's wild places. She approaches her role from a background in Ecological Sciences and hopes to ignite a love of the natural world through gardening in her programs.