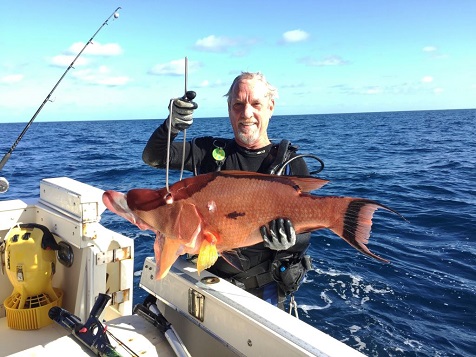 What’s behind that big brown snout?

Hogfish, often called ‘hog snapper,’ are actually members of the wrasse family. They are harvested in the US from North Carolina to the Florida Keys. Spearing is the most common way to land a hogfish, and getting in the water to shoot one of these delicious beauties sounds great when the temperatures heat up! However, they can also be caught on hook and line, and recently more and more anglers on the west coast of Florida are specifically targeting hogfish with a rod and reel.

Hogfish are protogynous hermaphrodites, which is just a fancy way of saying they all begin life as females and will change sex into a male if they live long enough. They weren’t regulated until 1994, when a minimum size and recreational bag limit were implemented. Size limits are based on the smallest size that hogfish are able to change sex (14 – 16 inches long). Recent genetic analyses have demonstrated that there are different stocks, resulting in separate management measures for the Gulf of Mexico and South Atlantic. A male hogfish struts his stuff to a nearby female during spawning season.

A male hogfish will spawn daily with as many females he can get to cooperate before the sun sets. Actual spawning occurs during the late afternoon, but the attentive male will court his females all day long. Each courtship display lasts 15 -30 seconds, during which time the male will make multiple ‘dancing’ maneuvers to impress his female audience. This involves raising and lowering his dorsal spines in rapid succession, while quivering his “filet” muscles pointedly at the female. A single male may participate in over ten spawning events per day with the females in his harem.

If the male dies, he will be replaced by a nearby male or one of the largest females in the harem will begin the transitional process of sex change. Sex change takes weeks – months to complete, so removal of the dominant male from a harem during spawning season has the potential to disrupt the spawning potential of the entire harem. Hogfish can live for over 20 years, and reach lengths of 30 inches (and weights of 20 lbs!) Analyses are ongoing to further explore the genetic structure of the hogfish throughout the Gulf of Mexico and Atlantic Ocean. Interested spearfishers and anglers that would like to contribute fin clips for this research effort can contact Angela Collins (abcollins@ufl.edu).