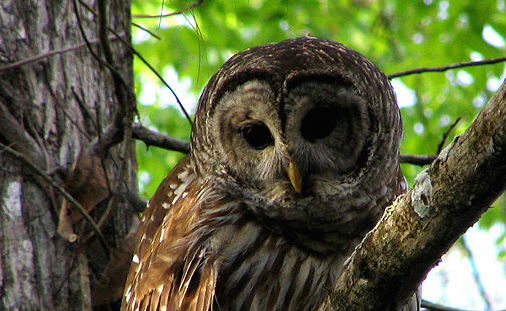 Q and A: As northern bird watchers, we are wondering what avian activities are prevalent this time of year?

Throughout Florida, this is a great time to be bird watching. This is the best time of year for watching waterfowl on wetlands, lakes and prairies. Snail Kites are gathering in South Florida to roost and nesting activities are beginning. Great-horned Owls and Barred Owls are courting. Listen for them. Oscars are abundant in the Everglades Water Conservation Area canals taking worms, crickets, and beetle spins. In north Florida, Goldfinches should be seen at feeders. If it is cold enough, Yellow-rumped Warblers may show-up at feeders. In north Florida, Bald Eagles should begin hatching around Christmas day. The Wood Stork began nesting in October and can be seen throughout the southeastern part of the United States. There is much to see in Florida, but look or listen for species that may not be seen often. Several uncommon raptors are active in December.

Owls are nocturnal birds of prey. These raptors have a large rounded head with large forward-facing eyes set in their sockets so these birds have to move their entire head to look from side to side. Feathered facial disks focus sound more directly toward their ears. Soft feathers allow owls a silent flight. It is often difficult to see owls at night; however, they can be recognized by distinct voices or calls. The Great-horned Owl is the largest owl averaging about 20 inches long. This owl has feathered ear tufts, a dark back and horizontally barred underside, and yellow eyes. The call of the Great-horned Owl consists of four to six rapid low hoots followed by two slower hoots. This owl is uncommon, but is a year-round resident statewide. Typical nest sites include abandoned raptor or crow nests. Prey consists of ducks, geese, skunks, and other raptors.

Kites are graceful, soaring raptors. The Snail Kite is approximately 17 inches long and eats only apple snails. These kites have dark bodies with white at the base of the tail. They live in wet prairies and marshes and are nomadic in the winter. Kites are in the same family as eagles, accipiter and buteo hawks, harriers, and osprey. The Snail Kite is classified as endangered by both the U.S. Fish and Wildlife Service and the Florida Game and Freshwater Fish Commission.

These birds of prey are at the top of many food webs that exist in a variety of Florida’s habitats. They are often exposed to many chemicals and diseases. For example, mercury may be absorbed by a plant, which is then eaten by a rodent, which is then eaten by the raptor. Because of their role, raptors are good indicators of environmental quality and essential to the natural pest control of many insects and rodents. All hawks and owls are protected under the Migratory Bird Treaty Act of 1972. This act prohibits the capture, killing, or possession of these birds without special permit. The Snail Kite is protected under the Endangered Species Act. The annual Christmas bird count begins mid-month, so have a great time bird watching in December.

← Q and A: We have mockingbirds keeping us up at night, what can we do?
Q and A: I have a black bear that is foraging near my remote home and would like to know if there is anything I can do to prevent it from traveling onto I-75 which runs behind my property? →