When Miles Edward Groover retired as an Extension agent in Jefferson County in 1957, it was significant enough to warrant mention in the Chicago Defender.

Groover was among the first Black Extension agents in Florida. He grew up in an era in which Blacks had little access to high quality education. As a child, he helped his grandparents operate a tenant farm by day and studied by night to become a teacher. He put aside a little each year from the crops he tended with his grandparents toward a farm of his own, and by the time he was 15 he had become a schoolteacher and a landowner.

In an era in which whites would not sell land to Blacks, Groover somehow amassed more than 100 acres, and he sold and sometimes even gave parcels to disenfranchised Blacks.

His generous and entrepreneurial spirit made him a leader in the Black community in Jefferson County during 22 years as a schoolteacher and an additional 33 as an Extension agent.

While we at UF/IFAS strive to strengthen our commitment to inclusion, diversity, equity and access (IDEA), Black History Month prompts us to reflect and to learn how we got here. We do this through stories, and Groover’s is too seldom told.

A Legacy Protected by Granddaughters 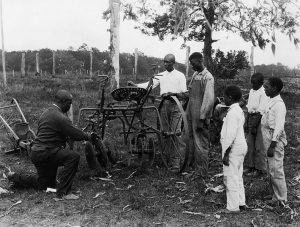 It’s been largely told by his descendants—granddaughters Ann Herring and Sonja Vaughan. Groover’s is an important part of UF/IFAS and Florida A&M’s century-old story of Extension. Sharing it is an important step toward revealing what one UF/IFAS unit’s new IDEA plan called “hidden figures.”

As an Extension agent serving Black communities, Groover worked in partnership with FAMU to provide guidance and technical assistance. Not only did he help teach farmers how to grow crops, he helped teach them how to operate farming equipment and promoted sustainability. People also went to “Fess,” (short for professor) as he was known to those closest to him, for advice on the law or any other matter they were reluctant to bring to white county officials in Monticello.

John Lilly, director of UF/IFAS Extension Jefferson County, compares Groover’s impact on the agricultural development in this corner of rural Florida to that of George Washington Carver. Lilly has kept Groover’s memory alive by sharing old newspaper articles and keeping in touch with Herring.

Herring still lives on the Groover homestead in the Dills community in Jefferson County, where Groover’s legacy is memorialized in the Elizabeth Elementary School for Black Children, for which Groover donated the land. Herring has partnered with FAMU Extension faculty member Sandra Thompson through the North Star Legacy Communities Initiative to restore the school through National Park Service funds. The school, which closed in 1964, was named a historical site in 2009.

From Segregation to Induction

Vaughan recalls going to the State Fair in Tampa with her grandfather every year to set up a display of pecans, cotton, and other crops in a segregated exhibit hall. Groover won many awards for his farm products, but still they had to drive to Plant City each night to stay with a relative because nearby hotels did not allow Black patrons.

In 1998, Vaughan and Herring returned to the State Fairgrounds to celebrate their grandfather’s legacy as he was posthumously inducted into the Florida Agricultural Hall of Fame, based on a nomination from his daughter and FAMU graduate, Doris Groover Herring, as well as his granddaughters.

It was another first in Groover’s career of so many of them. He was the first Black inductee.

Sharing history like Groover’s expands our history, and in so doing expands our view of who we are as land-grant stewards and partners.