A Brief History of Hillsborough County’s Forest Communities, through 1978

The county is characterized by relatively flat terrain and low elevations. There are four major natural regions in the county: highlands of sandhills, inland flatwoods, coastal lowlands, and river valleys.

From table #1, it can be seen that a majority of the county was covered with pine forests (70%). Other dominant ecosystems were those associated with wetlands in the form of hydric hammocks (12%) and cypress domes and strands (7%). 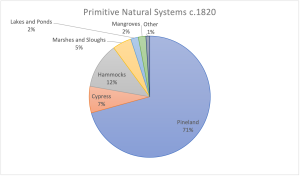 The percent distribution of land use types for 1948 is shown in figure 2.10. When comparing the land uses of 1948 to those of the Primitive Era, dramatic changes can be seen. Pine forests, which were formerly the most dominant ecosystem, occupy only 10% of the county. Most of this pineland was converted to agricultural (44%) and urban (9%) uses. 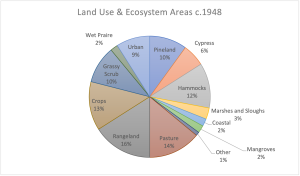 Figure 2.13, shows the increasing trend toward urbanization. Over the thirty-year period from 1948 to 1978, the amount of urban land increased by 13% and the agricultural land area increased by 8%. The growth of the urban and agricultural sectors have been at the cost of the natural system. Pine forests which once occupied 70% of the county now occupy only 2% of the same area. With the easily developable pineland being depleted, urban and agricultural development has begun encroaching more heavily on the fragile wetland and coastal areas. 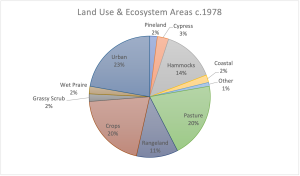 Also known as dry prairie and native rangeland. It is a treeless system dominated by grasses and shrubs, occurring in seldom-flooded, dry areas having frequent fires. Dominant species are saw palmetto and wire­ grasses. Soil and drainage characteristics are similar to those of pine flatwoods, but the increased frequency of fire prevents the growth of pines. The activities of main in harvesting pine trees, in draining, and increasing the frequency of fire have converted many former pineland areas to this system.

Freshwater ecosystems characterized by open water with slow exchange and seasonal stratification. Lakes in the region vary from mesotrophic (moderate nutrient level) to eutrophic (nutrient rich), but the large per­centage (by area) are the latter.

Sometimes it is called freshwater meadow or shallow fresh marsh, is dominated by a herbaceous cover of grasses, sedges and herbs, in varying proportions, and may also contain scattered shrubs and small trees. Spe­cies include spike rush (Eleocharis baldwinii), beak rush (Rhynchospora cephalantha), St. John’s wort (Hypericum fasciculatum), yellow-eyed-grasses (Xyris sp.), red root (Lachnantes caroliniana) and sedges (Carex sp.). The general appearance of the prairie is that of an overgrown field. The wet prairie occurs in areas of low topographic relief and receives water from runoff from higher, nearby areas. It is generally associated with cypress/ bay swamps. It is seasonally flooded by fresh water and remains wet to moist throughout much of the year.

These wetland forests, dominated by deciduous hardwood trees, are found in strands along many drainage ways, water courses and along lakes. These are areas influenced by seasonal flooding. Although these mixed hardwood swamps are characterized by a preponderance of deciduous tree species, they generally are not dominated by any one species. Such hardwood swamps are variable, with species types dependent upon size of the waterway, its flow rate, water quality and silt-turbidity characteristics. The most common species are: red maple, water tupelo (Nyssa sylvatica var. biflora), sweet gum, bald cypress, water ash (Fraxinus caroliniana), Florida elm (Ulmus floridana), and cabbage palm.

The mangrove swamp is a wetland forest that is regularly flooded by saline tidal waters. It is found along the protected coast, along tidal rivers and creeks, and in bays and estuaries. Dominant species are red mangrove (Rhizophora mangle), black mangrove (Avicennia nitida), white mangrove (Languncularia racemosa) and buttonwood (Conocarpus erectus).