When we think of things as being invasive we often imagine something like water Hyacinths covering every inch of a waterway or acres of Brazilian Peppers blocking out the sun where nothing else will grow. Invasive species are all around us. Both animal and plant, they harm our ecosystems as well as alter them; sometimes in irreversible ways. Because some of these plants have been here so long, they are often accepted as part of our natural areas.

Part of my job as an Environmental Horticulture Agent with UF/IFAS Extension is to educate people on the merits of eliminating these exotic plants and animals. It can sometimes be an uphill battle. One of the plants that comes to mind is Lantana camara. Lantana is beloved by butterfly gardeners and loathed by ranchers and citrus growers. Most homeowners that grow it are not familiar with the invasive issues surrounding this hated and beloved plant. Because it has been in cultivated in Europe since the 1800s, it has been released widespread in warm climates of the United Sates. The University of Florida lists it as a Category one invasive. The lower the category number, the more damaging the plant is considered. There are only Categories 1 and Categories 2 invasive plants.

Lantana has taken root in our natural areas and crowded out native species. It is toxic to cattle, blistering their skin in smaller doses, while possibly killing them if too much is ingested. Other animals such as cats and dogs can become sick if they ate the berries. There is also records of children dying because they consumed the berries (Morton 1971b). Invasive Lantana has hybridized with native Lantana depressa in south Florida. Because of this, this native species has become genetically contaminated and possibly threatened to become extinct. 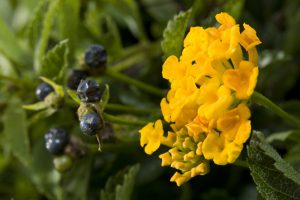 Like some gardeners, birds are also fond of Lantana. Unfortunately, they are almost single-handedly responsible for its spread across the countryside. This is why gardeners do not see little seedlings popping up around the plants in their garden. Because of this, they don’t understand how the plant is invasive. Because Lantana takes weeks to germinate, those that are not eaten by birds, often never sprout. Seed dormancy can be broken by passing through a bird and deposited in fertilized packages. Its common to find Lantana along fence lines and under trees where birds often perch. This becomes an extra aggravation for people with fenced livestock.

Butterflies and other pollinators love Lantana. Conflict with gardeners that do not want to give them up, has a simple solution. Sterile varieties are available on the market. You no longer have to be part of the problem but can part of the solution by promoting and teaching about these varieties. The University of Florida has released two varieties called ‘Bloomify Red’ and ‘Bloomify Rose’. These two varieties will not produce viable seeds. You can read more about these cultivars at the link below. Varieties recognized by the Florida Exotic Pest Plant Council as sterile are ‘Gold Mound’, ‘New Gold’, ‘Alba’, and ‘Patriot’.

Two Infertile Lantana Cultivars for Production and Use in Florida

Like and Follow me on Facebook at Hometown Gardener, and join our Facebook groups, Heartland Beekeepers, Highlands County Master Gardeners, and Central Florida Butterfly and Pollinator Club. Read my other blogs by clicking here. That’s what’s new from the Hometown Gardener.

Watch the Trailer for our November 21st, 2020 Garden Festival and Plant Sale Festival!

David Austin is a UF/IFAS Extension, Residential Horticulture Agent and Master Gardener Coordinator in Highlands County, Florida. Follow him on Facebook on his Hometown Gardener Page.