The history of Florida farm workers isn’t very different from other states throughout the U.S. Of course today, most of the farm labor is provided by Latin American citizens traveling to the U.S. on work Visas. This was not always the case, however. The history of farm workers hasn’t always been a positive story to tell. All of us know the experiences of early America and the slave trade. But African Americans were actually not the first reported “slaves” in America. Many of our first laborers were actually indentured servants brought here from England. Throughout the 1600, many indentured servants came to America with the promise of free travel in exchange for their labor. Once their contract or debt was paid off, indentured servants were given their freedom and perhaps plots of land. This practice did not always end with freedom and property however. Many servants died before paying off their debt or would be forced into additional reoccurring debt due to the fact they would have to pay for food, supplies and housing often provided by their employers.

By the mid 1600’s, indentured servants were not providing enough labor and this is the start of the African slave trading years, which lasted well into the 1800’s. During the mid 1800’s after the end of the Mexican-American War, thousands of migrant workers poured into the U.S. from Mexico for temporary jobs and then would return as the seasons changed. In addition, for the next several decades, the U.S. began bringing in Asian labor as African Americans gained their freedoms to work in other industries. By the late 1880’s, many farm laborers were from China, Japan and the Philippines.

During World War I, growers in the U.S. were multiplying and thus, their need for a steady workforce increased. To fill this need, the demand for Mexican workers allowed for the first guest worker program allowing more Mexican workers to come to the U.S. to assist growers. This program was short lived and ended in 1921. 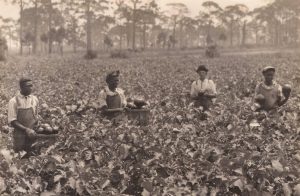 Then came two major events that devastated the farming industry in the U.S. forcing growers to become laborers instead of land owners – The Great Depression and the Dust Bowl. These two events forced many white farmers to sell their farms and become the vast majority of migrant workers traveling from farm to farm to pick fruit and other crops at extremely low wages. Nearly a half of million Mexican American workers were deported during this time as white laborers fought to keep their families fed. 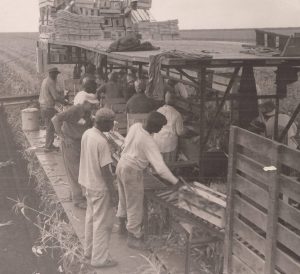 The turn around took nearly two decades and another World War. During WWII, the government started the Bracero Program. With the U.S. now facing a labor shortage as men went off to war, this program brought laborers back from Mexico to work in the fields. However, African Americans continued to be a major source of labor for American farmers. As time went by and more civil liberties were granted to African Americans, Latin American workers were recruited to work the fields once again, and remain the majority of 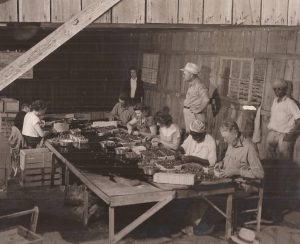 the work force today. Throughout the years farms large and small often sought out local laborers as well including women, children and their own family members, and these individuals would often earn less than the migrant workforce.

Today, the face of farm workers in Florida is primarily Latin American migrant workers still traveling throughout the U.S. following the seasons and crops from Florida to Michigan. With new labor laws, however, the number is dwindling forcing growers to come up with new and creative ways to harvest their crops. My next blog will feature of few of these methods as Gulf Coast Research Center continues to support and contribute to Florida agriculture.