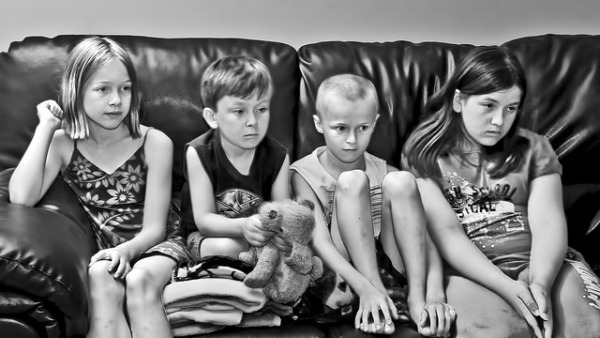 Have You “Gone Numb” to What Your Kids See on the Screen?

When my daughter, then 9, read the Harry Potter series not once, not twice, but probably seven or eight times, she begged to be allowed to watch the full movie series. I had no issues with the first few, but hesitated about letting her see the dark and frightening later installments, most of which are rated PG-13. In the end, we watched them together and she did fine–probably in part because she knew exactly what was going to happen. And now that she’s seen them, I’ve found myself wondering: is it okay to let her watch other scary, dark movies?

Are Parents Getting Desensitized?

These judgment calls can be really difficult for parents in real life. Although Harry Potter went okay, at times, my own kids have seemed affected by sad or violent things they’ve viewed even in children’s movies. I’ve sometimes wondered if this is because of their personalities, or because we’ve tended to shield them from this type of media. In other words, maybe they just aren’t quite “used to” seeing scenes like these.

A recent study in the journal Pediatrics looking at parents’ reactions to movie scenes reminds us that people really do tend to acclimate to violent and sexualized content after a while. This has some important possible consequences for our decisions about what kids can watch.

In the study, 1000 parents viewed 3 pairs of movie clips containing violent or sexual content. They were then asked how old children should be before being allowed to see the film. About half the movies were rated R, and half were PG-13.

Parents tended to start out being pretty restrictive—for instance, after viewing the first violent or sexual clip, many said it wouldn’t be appropriate till kids were about 16 or 17. Yet by the last clip shown, the age they said was okay had gone down dramatically, to about 13 or 14. The researchers mixed up the order the clips were shown in, so this effect didn’t have to do with the specific excerpts being shown.

The other noticeable trend was that parents who watched more movies themselves were more permissive. Younger parents were also more permissive, and when it came to sexual content, parents of boys were more laissez-faire than those of girls.

What can we make of these findings? The authors of the study suggest that just like the parents in the study, the Motion Picture Association of America (which decides how to rate movies) may have become desensitized to some themes. This could explain why gun violence, in particular, has become more and more common in PG-13 movies. In a way, this creates a vicious cycle.

However, as a parent, I take it more as a reminder that once we start showing more adult movies or shows to kids (especially if we’re used to watching a lot ourselves) it can be easy to “get used to” scenes that, in reality, we probably don’t want our kids to see just yet.

This is of concern since we do know there is some evidence that exposure to media violence and sexualization may be associated with problem behaviors in young people. These behaviors include desensitization to violence, reduced empathy, increased aggression, earlier sexual activity, and riskier sexual practices.

It can be hard to make individual decisions about each movie, TV show, or game, even with the help of generalized ratings, so it’s a good idea to do research on media you’re not sure about. Common Sense Media provides expert advice and parental reviews regarding the age-appropriateness of movies, games, apps, books, and so on. It’s also always a good idea to watch with your child, so you can discuss anything that comes up that bothers you or seems disturbing. Finally, communicating your own values to your child makes a big difference. Although you might not always feel like he or she is listening, parents’ opinions really matter, to kids and teens of all ages.

(Photo credit: TV, Because It Is So Much Fun by Randen Pederson. CC BY 2.0. Cropped.)

TV Violence–A Cause of Child Anxiety and Aggressive Behavior?–from WebMD

Television and Children–from the University of Michigan

← Woof! The Benefits of Dog Ownership for Older Adults
Can Overweight Kids Reduce Health Risks By Adding This to Their Diets? →