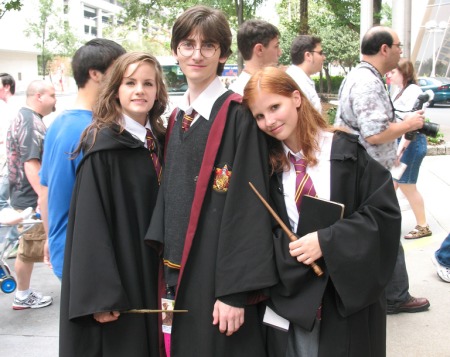 Are you a Hufflepuff, a Ravenclaw, a Gryffindor, or a Slytherin? Do you ever worry, even just a little, that He-Who-Must-Not-be-Named might one day come back?

If you know what I’m talking about, then you, like millions of other fans around the world, have read J.K. Rowling’s Harry Potter books or watched the movies. This astonishingly popular series, beloved by adults and children alike, has converted many reluctant readers into book-lovers. It’s one of those exciting, plot-driven stories that’s very hard to put down.

If you’re not familiar with the storyline, Harry Potter (the hero) and his friends battle an evil wizard named Voldemort and his minions. Voldemort believes that wizards who are not “of pure blood” (from wizard and witch parents) should be killed, and is also cruel to other beings he considers inferior, such as house elf servants. Harry Potter takes a stand against these atrocities. To an adult eye, the parallels Rowling draws to Nazism, racism, and other types of prejudice are pretty obvious.

But do young readers absorb the moral lessons the author is trying to teach? That’s the question asked by an interesting new study in the Journal of Applied Social Psychology. Researchers wanted to find out if young people who read Harry Potter books were less likely to have negative attitudes toward groups who often suffer discrimination, such as refugees, gays and lesbians, and immigrants. They looked at three different groups of young people to learn more.

Identifying with Harry: The Key

In the first study, 34 Italian elementary schoolers first completed a survey on their attitudes toward immigrants. They then read selected passages from Harry Potter books and discussed them with a group leader. Afterwards, students who’d read passages that depicted Harry Potter fighting against prejudice had developed more positive attitudes towards immigrants. However, there was an interesting caveat: this was only true of children who identified with Harry, the main character.

In the second study, about 100 Italian high school students indicated whether they’d read Harry Potter books or seen the movies. They also took a questionnaire about their attitude towards gays and lesbians. Once again, those with more exposure to the series had more positive attitudes towards this often-marginalized group—but only if they identified with Harry.

And in one final study, about 75 British college students were asked about their attitudes towards refugees and willingness to accept them, as well as their exposure to the Harry Potter franchise. Once more, more exposure to Harry Potter was linked to more tolerant views of an out-group, seeming to help students identify with immigrants’ experiences. However, in this case, lack of identification with the series’ villain was more important than identification with its hero.

Importantly, these studies controlled for other factors, like age, gender, media viewing, general book reading habits, and prior exposure to the groups the studies focused on.

Can Fiction Change Us?

Experts have long known that one effective method of reducing prejudice is simply to get to know a range of different people whose life experiences and backgrounds are different from our own. Studies also suggest that knowing that one of our own friends is friends with a so-called “out-group” member (such a refugee or gay individual) can reduce prejudice as well. This interesting study suggests that simply reading about and identifying with a character who befriends and stands up for out-group members may be effective as well.

As the mom of two kids who are preoccupied (okay, verging on obsessed!) with Harry, Ron, Hermione, and their imaginary world, I consider this great news. Those of us who love to read have probably always suspected that literature has the power to change us for the better. It’s pretty amazing to have some more concrete proof of the power that books can have to fight prejudice and discrimination.

Understanding Prejudice: Bibliography of Children’s Books –A list of children’s book that deal more explicitly with the topics of prejudice and discrimination and those who have fought back against these problems

Partners Against Hate: How to Talk to Your Children About Bias and Prejudice

One Comment on “Can Harry Potter Make Kids Less Prejudiced?”