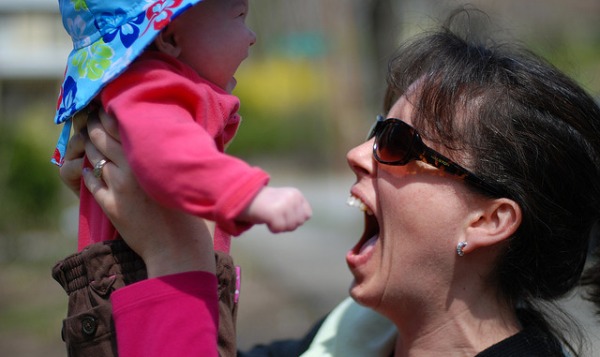 “Do you like that delicious sweet potato? Doooo youuuu?”

If you’re a parent—and even if you aren’t!—you probably recognize this tone. Some call it “baby talk,” and I’ve met a few moms and dads who say they hate it!

However, the verbal style in the examples above is actually what child development experts call “parentese.” Parentese is not the same as cutesy or nonsensical baby talk, such as “Here’s oo iddle widdle teddy-weddy, boo-boo!” Instead, parentese, which seems to be a universal, cross-cultural instinct, is about high-pitched tone, slow tempo, simple words, and exaggerated pronunciation. It’s often accompanied by more gestures and more dramatic facial expressions. And it helps us communicate better with babies.

In fact, experts believe that hearing more of this infant-directed language actually helps babies learn to talk. In a recent study, researchers attached a tiny clip-on device to the outfits of 26 babies who were about one year old. The devices were used to record hours of babies’ natural speech environments. Researchers then analyzed the recordings to separate out instances of “parentese” and of babies’ own babbling and speech.  Later, when the children were about two years old, the researchers asked parents to count the number of words their children were able to say.

Babies who had heard the most one-on-one “parentese” at age one turned out to have the largest vocabularies at age two. The researchers believe that hearing this special “parentese,” which was directed just to them, also encouraged the babies to babble more. This was then connected to knowing more words later on.

Although moms and dads also spoke “parentese” to their babies in group situations with other people around, this didn’t seem to have as many benefits. There was something about one-on-one time that really mattered.

Time to Get “Fluent”

So what does this mean for parents and caregivers? These researchers encourage you to spend time really looking at and talking to your baby, using that special voice you probably know so well.

While parentese comes naturally to many of us when we meet up with a cute little baby face, some new parents may feel a bit silly or awkward speaking this way at first. If this describes you, you might keep in mind that at least in this study, the benefits of this speaking style were greatest when parent and baby were one on one. At least at the beginning, you can practice when you and baby are alone. Soon you’ll be speaking this “language” like a native.

Features of Parentese–from Read to Your Baby

← Missed The Affordable Care Act Deadline? You May Still be Able to Sign Up!
Plan for a Safe Fourth! Fireworks Safety and Fun Alternatives →