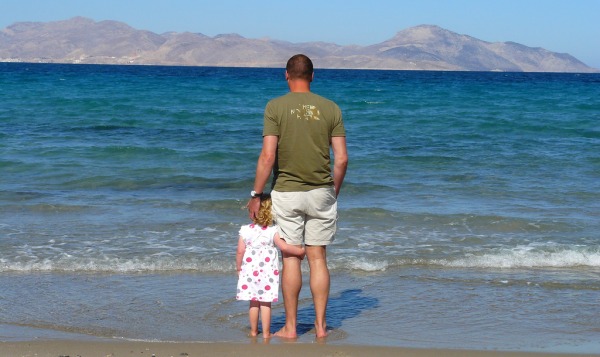 Modern Dads at the Crossroads

As a working mom of two school-aged children, I’m very aware of what seems to be constant media coverage of  the state of modern motherhood, and the emotional choices moms face about work and parenting. Yet while their situation is somewhat different than that of moms, I think there’s little doubt that dads also encounter stress and difficult decisions as they manage the competing demands of family and work.

Still, it often seems like we don’t hear much about modern fatherhood….except maybe right about now, as Father’s Day rolls around! Fortunately, plenty of researchers focus on fathers’ roles all year round. A 2013 report from the Pew Research Center offers some insight into the lives of today’s dads.

Less Time on Housework than Mom–But More at the Office

Most of us probably won’t be surprised to learn that fathers today do far more housework and childcare than past generations of men. However, on average, mothers still spend quite a bit more time with children and on home tasks, while as in the past, fathers tend to work somewhat longer hours than their employed spouses and partners.

Perhaps for this reason, today’s dads are far more likely than moms to feel that they aren’t spending enough time with their children. In fact, 46% of dads feel this way—almost half!–compared to just 23% of mothers. Fathers are also less likely than mothers to say they are doing an “excellent” or “very good” job of parenting. That feeling of lack of time might play a role here: dads were especially likely to rate themselves poorly as parents when they felt they weren’t getting enough time with their children.

Some might be a little surprised to learn that, much like working mothers, working fathers want flexible work schedules. About half say this is “extremely important” to them. And while working dads are somewhat less likely than working moms to say they “always feel rushed,” they were just about as likely to say they find it “very difficult” to balance work and family.

As families continue to evolve, it seems that both men and women are trying hard to cope with the competing demands of family and paid work. This Father’s Day, take a moment to appreciate the dads in your life. As moms know, it can be hard to juggle it all at times—but it’s worth it.

(Photo credit: Dad and daughter by Peter Werkman. CC BY 2.0.)

← Parents Playing Favorites Hurts–Even After We Grow Up
Texting Your Partner? Don’t Do This →