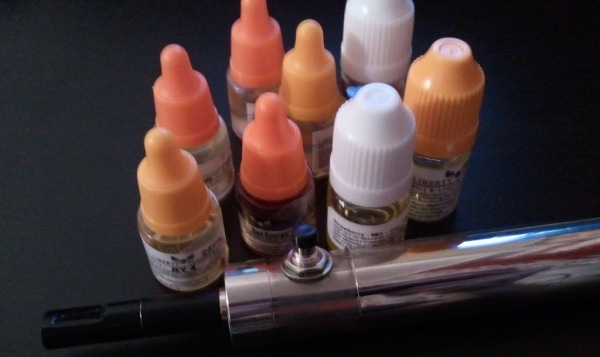 Just recently, my family and I went to a huge outdoor music festival that we’ve attended many times before. I was standing in line to buy lunch when I noticed some teens surrounded by a haze of what looked like cigarette smoke, but didn’t smell like it. It took me a minute to realize that I was seeing e-cigarettes in action for the first time.

These devices have been in the news for a while now, and they’re certainly controversial. An e-cigarette is a battery-powered metal and plastic gadget that vaporizes a liquid that containing nicotine, along with additives and flavorings, such as fruit, mint, and even chocolate. Users inhale the vapor as they would cigarette smoke. Using e-cigarettes is also sometimes called “vaping.”

E-cigarette manufacturers claim that the devices are cleaner and safer than traditional cigarettes, and that they can help smokers who are trying to quit. But there are many unanswered questions about the vapor they emit and its effects on others in the area. What’s more, health authorities worry that the devices may be dangerously appealing to children and teens (especially because they are still legal to sell to minors in most places) and could lead them to try conventional smoking. According to the CDC, e-cigarette use has been rising dramatically among high school students. Most of those teens also report smoking conventional cigarettes, and there’s been no noticeable drop in conventional smoking among this age group.

E-cigarettes are also emerging as a poisoning risk. As of February 2014, poison control centers around the country were fielding about 200 calls per month about the devices and the liquid used to refill them. Children can be at serious risk if they ingest or inhale the liquid in e-cigarettes or get it into their eyes. Symptoms include vomiting, nausea, and eye irritation, and poisoning can be serious enough to result in hospitalization. Part of the problem is that e-cigarette refill bottles are not yet well regulated or required to be childproof. The liquids are also colorful and may taste sweet.

The FDA has announced plans to begin regulating e-cigarettes, which should bring more safety and better understanding of these devices. More research is also needed to help us understand whether e-cigarettes can help people quit smoking, or whether they simply create more addiction problems.

What parents need to know

For now, parents should be aware that e-cigarettes may be appealing to children and teens due to their novelty and the appeal of their “flavors.” Make sure your kids and teens know that although e-cigarettes may be better for your lungs than traditional cigarettes, they are still addictive, and we have very little data about them. They should also know that nicotine is harmful to cardiovascular health regardless of whether it is smoked or vaporized.

Also, anyone who purchases e-cigarettes and especially their refill bottles must be vigilant to keep these items out of the reach of children. Even adults are at risk of accidental poisoning (for instance, when a bottle breaks or spills), so use great caution.

For more on e-cigarettes, visit the sites listed in Further Reading.

← Stop Dirt at Your Door: Leave Contaminants Outside!
Online Dating: Does Race Matter? →