Peppers come in an infinite array of colors and heat intensities. From the sweet and mild Bell Pepper, to the, “I need to go to a hospital from my mouth and throat being scorched,” ghost pepper. I personally like to grow them for both novelty and to supply my friends and family with peppers to make into salsa or hot sauce. Pepper plants can be very rewarding to grow, having a dual purpose of ornamental and edible. Every type of pepper out there has some story behind it. Take for instance the locally revered Datil Pepper (Capsium sinense Jaques). So steeped in mystery and held close and dear to the hearts of St Johns County residents. Where did it come from? Was it carried north by a group of Minorcan immigrants escaping indentured service for Andrew Turnbull at his indigo plantation in New Smyrna? Was it brought to the area from Chile by a jelly maker in the late 1800’s? Was it originally misidentified as having come from China (the second part of its scientific name sinense means “from China” in Latin)? Without genetic testing we may never know. We can be certain of one thing, the larger the lore, the more the pepper has become incorporated into local cuisine and tradition. The flavor is said to be similar to, but more fruity than a habanero. You can find more information in this EDIS document.

Many of you may be familiar with the taste test method developed by Wilbur Scoville to measure the heat of peppers. This has now been replaced by a modern, more accurate measurement method called high performance liquid chromatography (HPLC). HPLC measures the amount of heat-producing capsaicin chemicals. These amounts are then converted into the Scoville scale that people know and love. The Scoville range for peppers is from zero for sweet peppers with no heat up to around 2 million for the world’s hottest peppers (like the ghost pepper). There can be large variations in heat from the same seeds grown under different conditions or in different geographical areas. For more information, see this EDIS document. 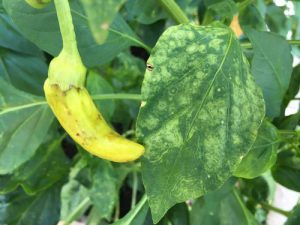 There are a few things to consider when growing peppers. Commercial growers have tools at their disposal to fumigate and sterilize their soil. Home growers may have better luck trying to grow in large, clean planters. Potting mix should be free from pathogens and unused bags of mix should be stored off the ground. Whenever possible, the plants should also be grown raised off the ground. There is a vast array of pathogens and plant parasitic organisms that can be present in native soil. These include fungi, bacteria, viruses, and microscopic plant parasitic roundworms called nematodes. Nematode feeding damage can reduce the plant’s resistance to pathogenic fungi and bacteria. If you are careful to start clean and protect your investment, you will have a better chance of success. You can learn more about nematode management here.

Insects, and the pathogens they spread, can be another issue to consider. As your plants grow, they become attractive to sucking and/or rasping insects such as aphids, whiteflies, and thrips. If the feeding alone weren’t bad enough, it is their ability to transmit pathogens that is even more disconcerting. When these insects feed on infected host plants (which can include weeds), they can acquire viruses which can be transmitted through future feeding. The best strategy to combat this is starting early in the season and protecting plants with insecticides such as insecticidal soaps or horticultural oils. Some pepper varieties have more resistance to viruses than others. Symptoms of virus can include mottled or mosaic patterns in leaves and fruit, deformed upward curling leaves, stunting, wilt, and fruit blemishes. Obviously sick plants should be removed and disposed of. Because peppers are perennial, it may be tempting to grow them from year to year, but this opens up the possibility for a more prolonged exposure to virus transmission. You may be more successful if you start from clean seed each growing season. You can read more about pepper diseases here.