Weekly “What is it?”: Cypress Trees

I absolutely adore cypress trees. They have such a classic, unique, and powerful shape. Plus, they grow in some of the most beautiful places in Florida. Teaching a freshwater wetlands Master Naturalist class these last few weeks, we have had the opportunity to see many excellent examples of the species. While most old-growth cypress trees in our area were cut for timber over 100 years ago, we are lucky to still have healthy stands of the trees along local rivers and swamps.

Two striking features stand out when looking for cypress trees. First is their broad, buttressed base, which is often twice as wide as the main trunk. Just offset from the trees are their fascinating knees—quasi-root structures growing in a conical shape above the water or ground level. The purpose of these knees has long been a source of curiosity, with two main theories being the most cited. Both the wide buttressed trunks and the surrounding knees provide structural support to the tree, which is often rooted in open water or very loose, mucky soil. The other primary explanation is that the knees provide oxygen exchange in low-oxygen water, much like the pneumatophores in mangrove trees. Other ideas over the years have included nutrient and carbon storage, erosion control, or methane production. 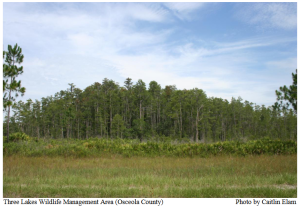 Cypress trees are an ancient species—records of their presence in North America date back 70 million years. They are deciduous trees that change to a brilliant fall orange before falling, yet have needles that look evergreen. Besides swamps and rivers, cypress trees will grow in typical landscapes. They’ll often grow in clusters known as “cypress domes.” These domes are often noticeable in agricultural land, where farm fields surround a stand of trees in a low spot in the landscape. Often forming a circle, the cypress trees in the middle will grow taller (where the water is deeper) and shorter trees will grow along the edges.

Any of these habitats my be home to both varieties of cypress—bald and pond. Believed for years to be two distinct species, botanists now consider them varieties of the same tree. Bald cypress (Taxodium distichum) has flat, feathery leaves and tend to grow in steady, flowing water. Pond cypress (Taxodium distichum var. imbricarium) are more common in still water, and their needles are rolled and stiffer. I have seen individual trees with both types of needles among their branches, lending credence to the idea that the two tree types are one species that exhibits traits differently based on environmental surroundings. Cypress cones are woody and spherical, about an inch in diameter and growing in clusters from the branches. Due to their growth in sensitive wetland habitats, we do not recommend homeowners use cypress mulch, as it is often harvested in from the wild in an unsustainable manner.