Since we are not sure of everyone’s level of invasive species understanding, let’s start from the beginning – the ole “this is a baseball” idea. 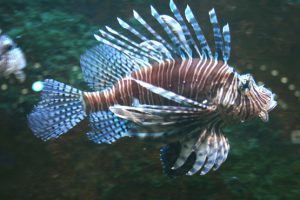 Actually, different agencies and departments define the term differently. Some may call one species invasive while another department may not. But there is one thing all agree on … the term invasive species means they are “bad”.

Why bad? What makes a species bad?

Using the term bad we are meaning the species causes an environmental and/or an economic problem. An environmental one could be the decline of local native species, or the overall biodiversity of a local system. Invasive species are known to reproduce at high rates and quickly overtake a system becoming one of the more dominant species. The decline of local biodiversity can be problematic for the system itself. If most plants within a system are of the same species (such as an invasive), and that species were to develop a disease, then very quickly the disease can spread, the plants die, and the herbivores then have nothing to eat, followed by the carnivores have nothing to eat. It could be problematic in the sense that if the invasive plant is the dominant one, and the herbivores do not (for whatever reason) want to consume it, they will leave, and on down the chain.

In some cases, this change in species composition can have an economic effect. For example, if the introduction of an invasive species were to cause the decline of a commercially valuable species (such as mullet, oysters, or cotton) this could be very costly for the business and consumers. Some invasive species have been known to enter our homes short circuiting electrical systems or creating environments that become toxic and require costly clean ups.

In short… they are bad.

This seems simple. Why would different agencies and departments differ in what they call “invasive”?

Part of this is due the point of origin and how the species arrived in the local community. At the University of Florida, we will not use the term “invasive” unless it is a non-native species that was introduce by humans.

Non-native is relative. We certainly understand that lionfish from Indonesia are non-native. However, red and black mangroves are NOT native to north Florida. Would this make their occurrence in the Florida panhandle categorize them as “invasive”? Would they be problematic here?

Well, they would take over a north Florida salt marsh. Mangroves are coastal salt tolerant trees, like the salt tolerant grasses of salt marshes. But as the trees grow, they block needed sunlight to the grasses and, thus, the grasses will begin to decline – with mangroves occupying the new space and taking over the marsh. So, it would appear they were “invasive”. HOWEVER, they arrived here on their own. Humans did not bring them here and so “mother nature” would have done this with or without us. In this case, no… we would not call this an invasive species – but some agencies might.

The distribution of non-native species by humans does not have to be intentional for the term “invasive” to be used. One method of unintentional dispersal has been ship ballast. When ships are full of cargo their weight stabilizes them at sea. But on the return trip, when they are empty, they will fill spaces at the bottom of the hull with seawater to make the weight as if there was cargo on board. When they “suck in” this seawater they, at times, will suck in local aquatic plants and animals. When they arrive home ready for the next load – they discharge their ballast, thus releasing the new creature to the local environment – and here we go.

We have seen similar situations when they load ornamental plants on trucks in south Florida for markets in the southeast. Many “hitchhikers” grab a ride and are spread. Boats zipping through a lake or reservoir full of an invasive weed can accidentally grab them and, once on the boat trailer, move them to different lakes without us knowing it.

There are cases where the non-native species are dispersed by us intentionally. The aquarium, or reptile trade for example. There are many beautiful exotic fish, snakes, and lizards from exotic places around the globe that are popular by those in the pet trade. These are intentionally brought in and, sometimes, escape – or are released by the pet owner.

The net result of these movements CAN be environmental or economic problems.

How do we know if a plant or animal in our yard is an invasive species?

There are two resources where you can look and see if a species is listed, or what species ARE listed, and (with one source) how close this species has been reported in your community.

EDDMapS list both plants and animals – it also has a distribution map for each species, so you know if it has been found in your area. Searching this site can give you an idea of what has been seen in your area.

The other is University of Florida’s Center for Aquatic and Invasive Plants (http://plants.ifas.ufl.edu/.)

This site list plant species in alphabetical order and gives suggestions on how to remove them.

– Let’s look through your yard to see if you have any invasive plants; again if you think it is invasive you can check with these references OR SEND A PHOTO TO ME (roc1@ufl.edu).

– If you do have an invasive plant – let’s report it! You can go onto EDDMapS.org and do so. You will need to create an account, but it is free. And do not worry if your identification is wrong – they have verifiers to make sure.

– It will then be up to you whether you want to try and remove it. If you can dig them up – great! HOWEVER, be sure you get all fragments and seeds. If it is too much to remove with a shovel, etc. there are chemical treatments you can apply, and these are listed on the fact sheets from the UF IFAS Center for Aquatic and Invasive Plants website.

– LASTLY, let me know what you have! Email me or reply to the blog. If you have questions or comments – let me know. Next week I will begin to highlight/focus on specific invasive species we have in your yards in the western panhandle of Florida. If you have a species you want highlighted – let me know.