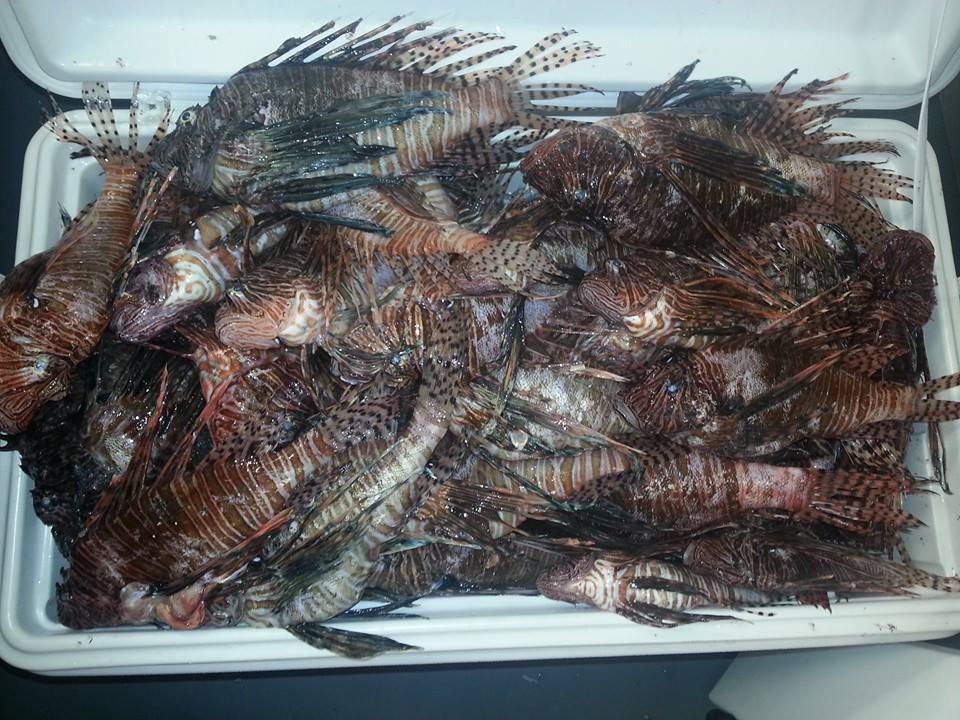 How is the Lionfish Program Going? As we approach the National Invasive Species Awareness Week (NISAW) it is a good time to re-examine how the management of one of the biggest concerns in the marine environment is going – the lionfish.

Most of us have heard of this problematic invasive fish, some probably have consume it at one of the local events or restaurants, but are our management efforts working?

Honestly, it is hard to say for sure. Several different invasive managers and researchers say different things, but most agree that to effectively manage an invasive species you need to remove a minimum of 25% of the population annually and the earlier you get on the problem, the more successful you will be in eradicating it from your area. This has been a problem for the management of lionfish.

Are the tournaments working?

Well, there certainly are tournaments in the area. We know how many are reported at each tournament and from my numbers – I would say from a large tournament, like the Lionfish Removal and Awareness Day in Pensacola, 5000 – 10,000 fish in a weekend is a fair number. Of course, the weather has a lot to do with the success of an event like this. Multiply this randomly selected number by the number of tournaments and you can get a rough idea. One study out of Dauphin Island Sea Lab suggest that the tournaments are very effective at removing fish from dived reefs – another one out of REEF in Key Largo, suggest that as many as 70% of the lionfish are removed during these tournaments. But, these studies also note that many of the “cleaned reefs” are re-populated within a few months, and not just by drifting larva – adults are found there. This suggest that adults are moving from nearby reefs to recolonize. This also suggest that in order for these tournaments to be the key part of the management plan, there needs to be more of them – possible one every three months.

The idea of promoting lionfish hunting to the diving tourist?

It is currently happening. However, many of the relatively shallow water reefs frequented by dive charters are“clean” (fewer lionfish). They, and the general public, frequent these reefs often enough to keep them under control. Businesses will need to market these trips in this fashion – they are not going to find the hordes of lionfish they have seen on the internet. However, there are still lionfish at deep locations (200’+) where the charters are not willing to take tourists. These are possibly the source of the recolonization. And so this tool in the toolbox has been effective in keeping shallow reefs (< 100’) clear of lionfish.

Promoting as a commercial fish product?

Meaning… you purchase a saltwater products license and sell your catch. There are local divers who are doing this. Statewide, this effort has been improving over time. There has been an increase in the number of dealers, commercial harvesters, annual trips, counties participating, price, and… the number of lionfish sold since 2011. However, there was a slight decline in all categories between 2016 and 2017 – not sure why. The Lionfish Cookbook provided by the nonprofit organization REEF.org

Locally, Escambia and Santa Rosa counties have been lagging behind the rest of the state on the commercial side of this issue. Escambia County logged 24 commercial harvesters and 10,367 lionfish in 2016 but dropped to 15 harvesters and 5,324 fish in 2017. Santa Rosa only reported commercial harvest in 2016, 7 harvesters and 1,390 lionfish. It would seem in an area where lionfish are denser than other parts of Florida the commercial interest would be higher. We will try to determine why this is not happening. I should note than Bay and Okaloosa are very active. Bay County is listed as one of the top four counties in number of harvesters, number of commercial trips annually, and lionfish sold; Okaloosa is one of the top four counties the number of dealers certified to buy. There is more to explore here.

No doubt, that the number of lionfish the state has is under reported. Many locals remove lionfish, take home to eat, and the state does not know how many. However, based on the numbers the state does have, the bottom line is in order to stay on top of the lionfish issue we will need either more divers in the water, or another method of removing.

It remains to be seen whether there will be more tournaments – putting on one is hard work. Many local fishing tournaments are now including a lionfish category. Lionfish do not typically bite hook and line but there are cases where they have, including a recent one off the 3-mile fishing pier. Despite this, many traditional tournaments are including a spearfishing category.