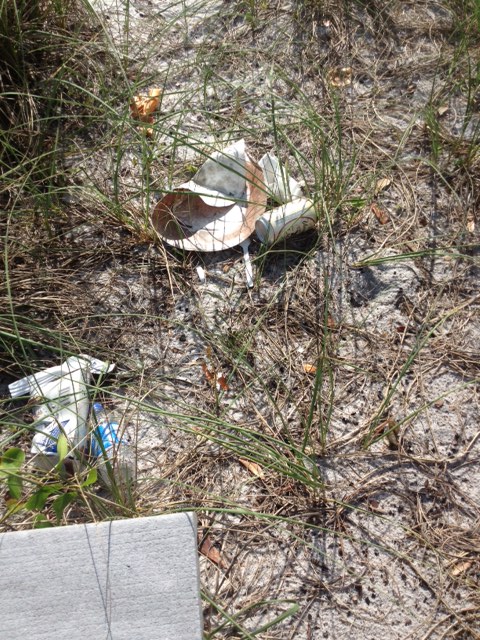 It is hard to say that one turtle is more beautiful than another; it is like saying one of your children is more beautiful than another, but this is one beautiful turtle!  The diamondback terrapin is the only brackish water turtle in the United  States.  Its range is from the estuaries of Massachusettsto the Texas/ Mexican border.  Within that range there are seven subspecies recognized; five of those live in the state of Florida.  The Northern Diamondback Terrapin (Malaclemys terrapin terrapin) extends from Massachusetts to the Carolina’s.  From North Carolina to about Daytona Beach is the range of the Carolina Terrapin (M.t. carolina).  The East Coast Terrapin (M.t. tequesta) can be found along the east coast of Florida from Daytona to the Florida Keys.  The Florida Keys is the haunt of Mangrove Terrapin (M.t. rhizophorarum) and along the Gulf coast of Florida from the Keys to Choctawhatchee Bay you can find the Ornate Terrapin (M.t. macrospilota).  From Choctawhatchee Bay to the Louisiana / Texas border is the home of the Mississippi Terrapin (M.t. pileata) and the Texas Terrapin (M.t. littoralis) is found inTexas estuaries and possibly south of the border into Mexico.  These turtles can be easily distinguished from other species in their coloration, generally light colored skin with dark spots or patches, and their choice of habitat – brackish salt marshes.

Terrapins prefer salt marshes with salinities between 10-15 ‰ in other words, not too fresh and not too salty.  Studies have been done on the salinity tolerance of these turtles and results show that they can live in water as saline as theGulf of Mexicoto freshwater water rivers but prefer brackish environments.  Captive terrapins have been observed drinking freshwater from the surface of the water when added and from small ponds and trays – suggesting that they do not normally “desalinate” salt water for drinking.  Though they have lacrimal glands in their eyes for removing excessive salts, this appears to be a stressed behavior.

Terrapins are true “home bodies” and inhabit creeks within marshes very near where they were born.  Though there may be multiple creeks within these marshes that are very similar, most populations prefer specific creeks and do not move between them very often.  Another requirement for terrapins is an area of high/dry ground for nesting.  Terrapins spend their time in the lagoons and creeks of these marshes basking near the surface or on open mudflats at low tide.  They feed primarily on shellfish, preferring snails and bivalves, but will also feed on small crabs, shrimp, worms, fish, and occasionally vegetation.

The females are larger (carapace length of 8-in) than the males (6-in) and have shorter tails.  Mature females may produce as many as 25 eggs in one season but are not large enough to carry all at once so they lay multiple clutches.  Nesting begins in mid to late April in our part of the country and females laying multiple clutches will do so every 16 days or so; they may lay 2-4 clutches in a single season.  Like most species of turtles, the sex of the offspring is determined by the nest temperature (the line being 29˚C; warmer = females) so generally the eggs in the upper part of the nest are female and deeper in the nest will be male.  Unlike sea turtles, female terrapins approach the nesting beach at high tide (± 1 hour) during daylight hours.  She will venture above the high tide line and dig her nest.  It is hard to say whether it is an innate or learned behavior, but females seem to select nesting areas based on the availability of shade; possibly to account for temperature variation within the nest.  Most of the nests we find in Santa Rosa County are near salt bush (Baccharis sp.) but we have found them in open areas and near debris like driftwood.  They also differ from sea turtles in that the young head away from open water and prefer the marsh.  Here begins the “mystery years” of turtle hatchlings; no one is really sure where they go and what they do for the next season or so.  As with so many varieties of turtles, the heaviest predation is on the eggs and young.  The dominant “nest raider” of terrapins is the raccoon; though crows and snakes such as the king snake and saltmarsh snake among others are also known to do so.  Hatchlings are preyed upon by a variety of animals including raccoons, otters, skunks, crows, and sea gulls; adults have few predators.

Terrapin populations have declined over their entire range in the last 150 years.  In the late 19th century it became “vogue” to eat terrapin and the popularity of the animal became an economic dynamo for many coastal fishermen.  I have seen drawings of such fishermen wading through the marsh with a hiking stick and a burlap sack.  Reports suggest they could earn $8/dozen; and this was GOOD money in the 19th century.  Terrapin researchers from the University of Alabama at Birmingham (UAB) recently came across a newspaper article from that time period that discussed a terrapin farm in Mobile County near Dauphin Island that had 25,000 terrapins taking 8,000 from the wild annually to help sustain the farm; this suggests that they were once very common there.  With the increase in the popularity of the animal for food came the decrease in their numbers, which in turn caused the increase of their price therefore causing the decrease in their popularity as a food item.  However, the introduction of the wire crab trap in the mid 20th century became problematic for them.  For reasons still not understood, they swim into these traps in the spring and can not reach the surface to breath; drowning many of them and making it hard for their populations to rebound.  In some states a “bycatch reduction device” or BRD is required on all crab traps to keep terrapins out.  Studies of these in New Jersey and Florida show that such devices have no significant impact on the crab catch but do reduce the number of terrapins captured.  These devices are currently not required by Florida Fish and Wildlife Conservation Commission but they do have ghost crab trap removal periods all over the state (it is between January 5th and 15th  in the panhandle).  “Ghost” or “derelict” crab traps are those that are not actively being “fished” but just left behind and are not only capturing and killing terrapins but all sorts of aquatic life and these traps need to be removed.  Terrapins are listed in the state of Rhode Island as an “endangered species” species and are listed as “threatened” in two other states.  Several states list it as a “species of special concern” but it is not currently listed at all in the state of Florida.  We have been conducting a monitoring program assessing the status of this animal in the Florida panhandle since 2006.  We have at least one record in every coastal county between Alabama and the Apalachicola River.  We have been able to identify five nesting beaches (2 in Santa Rosa Co. 2 in Escambia, and 1 in Gulf Co.) and believe that one population has between 25-50 individuals within it (likely much lower numbers than historically found in this area).  The researchers from UAB believe the number of terrapins near Dauphin Island have declined to about 150-200 animals compared to the numbers in the 1880’s during the time of that huge terrapin farm.  It is a turtle whose status is certainly of concern for many turtle biologists.

To learn more about this beautiful turtle and about the FWC’s crab trap removal program visit the following sites:

← The Invasion of the Lionfish
Diamonds in the Marsh →