Fast-growing air potato, Dioscorea bulbifera, is a real problem in Florida. It has no native natural enemies in the state, so nothing to inhibit its growth. This speedily climbing vine can take over a fence line, shrubs, or a small group of trees. If it is neglected long enough, it can cover whole yards, acres of woods, and even entire structures. 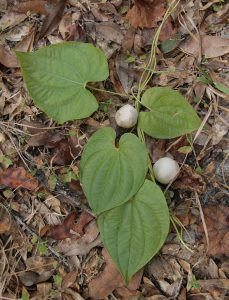 The vine is hard to fight because of its deep roots and prolific production of the bulbils that give it its name. (Do not eat these “potatoes!”) The bulbils grow all along the length of the vine and drop off when it is disturbed. Each one that falls to the ground can sprout a new vine.

Efforts to control air potato, either with herbicides or by manually pulling it, are exhausting and disappointing, with neighborhoods covered again the season after an air potato roundup. Fortunately, we are no longer alone in this fight. The enemy of our enemy, the air potato leaf beetle, is helping. 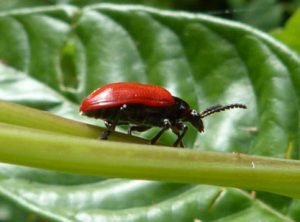 In the summer of 2012, the Florida Department of Agriculture and Consumer Services released (Lilioceris cheni), the air potato leaf beetle, to help homeowners and land managers better control the plant. These striking little red and black beetles hail from Asia, like air potato itself. The beetle and the vine evolved together, and the beetle, fortuitously, eats nothing but air potato leaves and bulbils. This means it is safe to introduce into the environment in Florida.

What You Can Do

Do you have air potato in your yard? You may already be benefiting from air potato leaf beetles feeding on the vines. If you don’t see beetles or signs that they have been eating vines (air potato leaves with beetle-nibbled holes in them), you may want to complete a report.