Amberjacks? A Complete Guide Of What You Need To Know Before The Season Opens.

Greater amberjack (Seriola dumerili) season is opening this Friday May 1-31st and again August 1st– October 31st in Gulf of Mexico state and federal waters here in Florida (regulations here). I thought this would be the perfect opportunity to share some facts about this species, update anglers on the current Gulf of Mexico regulations and a short Identification guide on how to distinguish greater amberjack from lesser amberjack, almaco jack and banded rudderfish. If angling and have and doubt on species identification, it’s always best practice to release the fish and let him see another day. Jacks are prized sport fish, providing anglers with some legendary fights! After just a few of them, anglers are often ready to trade in the rod for a break and a beverage. They are voracious eaters and often targeted by recreational, commercial and charter fishermen as they readily accept lures or natural bait in a variety of fishing methods. Greater amberjack are heavily sought after for their sport quality by the recreational fishermen and fillets by the commercial fishermen which puts a lot of pressure on this species! Moreover, it is super important to be able to properly identify which jack is on your line before throwing it in the ice box.

A Day In The Life Of A Greater Amberjack (Seriola dumerili):

The greater amberjack can be found on offshore reefs and wrecks in the Atlantic and Pacific oceans. Their range in the Western Atlantic is from Nova Scotia to Brazil and typically found in depths between 60-250 ft. This species can grow nearly 6 feet long and weigh up to 200 pounds with females growing larger than males. Greater amberjack can live up to 17 years with sexual maturity occurring between 3-4 years old and roughly 30-50 inches in total length. Amberjack spawn between March through June and during that time a single female can release between 18-59 million floating eggs. Eggs hatch within 34-45 hours and continue to develop as larvae for an additional 31-36 days. Juvenile greater amberjack are yellow in color and have 5-6 vertical bars along their sides. Small amberjack live among floating plants and debris found in the open ocean where they feed on plankton and small invertebrates. As adults, greater amberjack transition to feed on fish and invertebrates that inhabit both pelagic and benthic environments.

The Gulf of Mexico population of greater amberjack is listed as overfished in the 2017 stock assessment while the South Atlantic population is believed to be not overfished. There are now two separate management strategies causing regulations on size and season to differ between amberjack harvested on Florida’s East and West coast. Current regulations for fish caught in the Atlantic are: 1 per person, 28” fork minimum, open year around and in the Gulf: 1 per person, 34” fork minimum, season May 1-31 and Aug 1-Oct 31. The International Union for Conservation of Nature (IUCN) has listed greater amberjack as a species of least concern. The greater amberjack as well as some other members of the Seriola genus have been successfully bred and raised in captivity. Their fast growth rates and late age of maturity makes them a prime candidate for aquaculture. In fish and many other organisms, growth usually slows once sexual maturity is reached as energy is diverted towards production of eggs and sperm. There is plenty of scientific literature out there regarding spawning and rearing jack belonging to the genus Seriola so give them a read! Due to strict regulations in the United States and efforts by aquaculture operations, amberjack is listed as a best and good alternative fish by Monterey Bay Aquarium Seafood Watch Program.

Spaghetti? I didn’t order Italian?! Tapeworms belonging to the order trypanorhyncha otherwise known as spaghetti worms, can occasionally be found in the fillet of greater amberjack. Jack and other fish are the intermediate host for these cestode worms that undergo an interesting and complex life cycle. The cycle starts within a shark where tapeworm eggs are expelled in the predator’s feces and hatch into coracidium larvae. The tapeworm larvae are consumed by crustaceans (or possibly smaller fish) and change phase into procercoid larvae which wait and hope to be eaten by larger predatory fishes. Once the infected prey is consumed by a predatory fish, the worms transform into plerocercoid larvae and burrow within the muscle, often near the head or the tail portion of the larger fish’s body. The thought of why these worms are so concentrated in near the head and tail is that those areas are usually the first sites bitten by sharks when chomping on a fish. The final desired destination of these worms are inside a shark where they turn into adults, attach to the shark’s stomach or intestines and feed. Spaghetti worms are harmless to humans and can be cut out of the flesh. Amberjack that have been bred and raised in captivity have shown reduced tapeworm infection rates as their diets consists of pellets (more can be read here), this gives seafood consumers a good excuse to support aquacultured jacks! There are some fish parasites that can be transmitted to people so cooking fish thoroughly or freezing to FDA recommendations when eating fish raw should be taken seriously. Lifecycle of a Tapeworm, Photo NCfishes.com.

Amberjack have a firmer/steak like flesh that can deliciously be prepared, grilled, blackened or smoked. For an overview on how to smoke fresh fish check out our blog here and video here. The genus Seriola contains nine species, four of which are frequently encountered in the Gulf of Mexico. These schooling jacks inhabit offshore reefs and wrecks where they cruise the water column and search for fish and invertebrates. The largest of the four species is the greater amberjack, followed by the almaco jack; the lesser amberjack and banded rudderfish are significantly smaller species and can be similar in size. In Florida, a typical cookie cutter greater amberjack will be in the 20-40 pounds, almaco jack between 2-20 pounds and lesser/banded jacks weighing in below 10 pounds. Size is one criteria to take into account when identifying these species as it would be very very unlikely to encounter a 50 pound banded rudderfish or lesser amberjack, slightly unlikely to be an almaco jack and very likely to be a greater amberjack. The size of these fish can vary greatly throughout the world and along Florida’s 1300 miles of coastline. In Southwest Florida there may be some seasonal size variability with larger jacks moving closer to shore during the winter. Juvenile versions of these jacks can look different than their adult counterparts and undergo physiological changes as they grow. These changes can primarily be observed in juvenile coloration and pattern. As juveniles, these jacks are lighter in color with vertical bars along the length of the body. The number of gill rakers found on the fish’s gill arch are reduced as these jacks increase in size. Luckily slot and minimum size limits are regulated on all but one of these four species and helps in the prevention of misidentifying undersized jacks.

Using color for species identification gives you a guess but also can be unreliable as color can vary within the species based on genetics, size/age as well as fish activity. One feature that may be more pronounced when the fish is active and “lit up” is the darker colored eye stripe called the nuchal bar. In greater amberjack the nuchal bar starts from the nose and extends into the first dorsal fin area, in lesser amberjack the bar starts from the eye and extends to in front of the first dorsal fin. Banded rudderfish can be more blue-ish in hue as adults and have white tips on their tails. Almaco jack are usually darker in coloration than the other species which is more noticeable when observing the upper portion of the body.

Jaw maxilla. The simplest way to describe the maxilla would be the bones that form the top of the jaw and create the corner of the fish’s mouth. Greater, lesser and almaco jack have rounded bump on top of their maxilla near the eye, that portion is called the supra maxilla. This bump resembles a boot and once seen, is hard to un-see! Banded rudderfish have a different shaped maxilla and supra maxilla and is more flat/straight across with no boot/upturned portion. Greater amberjack and banded rudder fish maxilla lengths are also proportionally longer, the bone can extend to be near the middle of the eye but can vary depending on size of the fish. The other two species maxillas will most often end prior to the start of the eye, not extending past the mid section. One of the more definitive ways of determining which jack you have caught is by checking out the gill rakers. This should be a last resort method of identification as handling a live fish to see their gills can be detrimental to their health. A quick background on the structure of a fish’s gills, a gill can be down into 3 main functional units, the gill arch, rakers and filaments. The arch is the individual gill structure that contains bony comb-like projections called rakers and red gill filaments. The rakers primary function is to filter food and prevent particles from passing through the gills, both to retain food as well as prevent bits from damaging the delicate gill filaments. You can tell a lot about what a fish eats by checking out their rakers, fine close together projections mean that the fish is eating smaller food particles while robust short rakers indicate the fish is eating larger prey items. This can explain why as the jacks grow, the number of gill rakers is reduced as their prey size increases. I’ve seen slight differences in the exact number of gill rakers associated with each species but the general trend/amount is very similar across sources, this may be a result of what stage of life the count is taken. For jacks over 9 inches in fork length the number of gill rakers is as follows. The portion of the fish where the fin attaches to the body if called the caudal peduncle. The keel is a ridge located on either side of the peduncle and some members belonging to the jack family have pronounced bony projections called scutes. Greater, lesser and almaco jacks at smaller sizes will have more fleshy keels/peduncles while at harvestable size, the banded rudderfish will have a raised and rougher keel. Eye size can be used to determine species but often not as effective if you don’t have another similar sized jack to compare it to. Relatively speaking, lesser amberjack have proportionately the largest eyes of the 4 species while banded rudders have proportionately smaller eyes. 2020 Gulf of Mexico Regulations: Daily Bag Limit: Florida state waters: unregulated, bag limit 100 lbs per person, Gulf of Mexico federal waters: part of the 20-reef fish aggregate person per day aggregate* Size limit: none Season: open all year in state waters, in federal water this species is open all year but may change if the annual catch limit is reached between recreational and commercial landings. 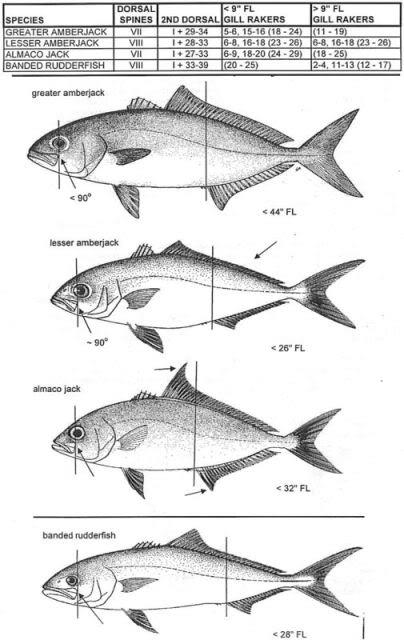 2 Comments on “Amberjacks? A Complete Guide Of What You Need To Know Before The Season Opens.”